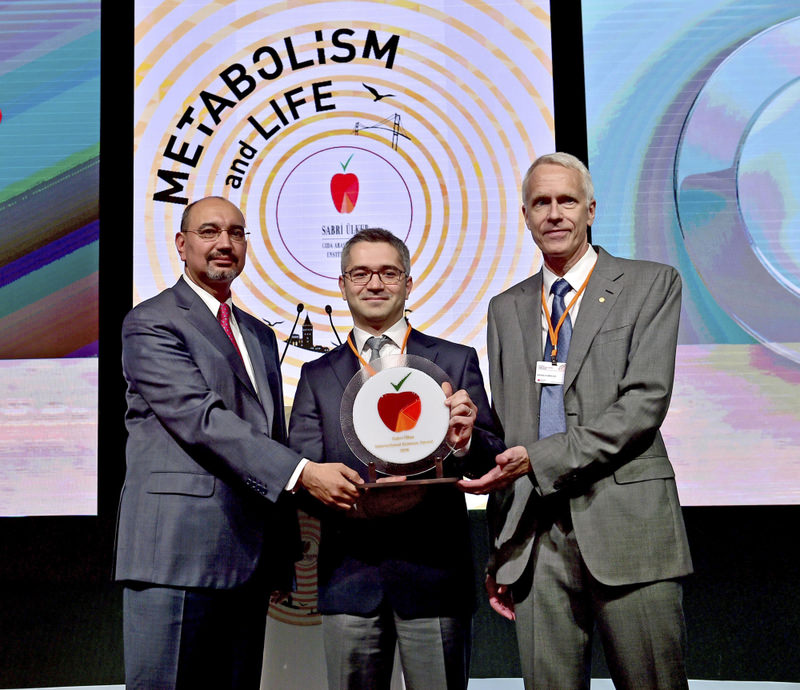 by Gülşah Dark May 07, 2016 12:00 am
The Sabri Ülker Center for Metabolic Research and the Department of Genetics and Complex Diseases at the Harvard T.H. Chan School of Public Health debuted the Metabolism and Life Symposium, which ended yesterday at the Four Seasons Bosphorus Istanbul with the initiatives of the Sabri Ülker Food Research Foundation.

Taking place on May 5-6, the symposium was an opportunity for attendees to learn from globally recognized researchers in the field of metabolism. Sessions covered presentations from renowned experts describing their work on unraveling the molecular details of metabolic pathways and how to interpret these findings into real-world approaches to treat or prevent metabolic disease.

Answering questions at a press conference on Thursday evening, Professor Dr. Gökhan Hotamışlıgil, the head of the center, said that they embarked on a scientific adventure without borders with the launch of the Sabri Ülker Center. "What we want to achieve is to avoid degeneration emerging with metabolic diseases and aging by revealing certain functions in food intake," adding that the studies will inspire new discoveries for longer and healthy lives. Dedicating themselves to understanding the molecular basis of obesity, diabetes, and related disorders, the researchers are trying to uncover many scientific questions from the effects of inflammation on diabetes, animal hibernation and aP2, a secreted fatty acid-binding protein. The center's studies have already been covered in Nature Medicine, Cell Metabolism and Science.

Taking the floor at the press conference, Ali Ülker, the deputy president of Yıldız Holding's Board of Directors, said that they want to become a source of motivation and flourish a scientific environment in Turkey by supporting the Sabri Ülker Center, housing many of the county's young researchers.

Also on Thursday, a grand award ceremony was held to present the Sabri Ülker International Science Award to Assistant Professor Kıvanç Birsoy, who has been researching on the relation between cancer and metabolism at the Rockefeller University. Professor Brian Kobilka of Stanford University, who won a Nobel Prize in Chemistry in 2012 for his work on G-protein-coupled receptors, delivered a keynote speech at the ceremony. As a multinational platform inaugurated in 2014, the Sabri Ülker Center for Metabolic Research investigates the molecular underpinnings of metabolism, its interactions with nutrients, and its dysregulation in chronic metabolic diseases such as diabetes and cardiovascular diseases as well as during aging, with the long-term goal of interpreting the findings into new therapeutic directions and strategies to prolong health span.
RELATED TOPICS