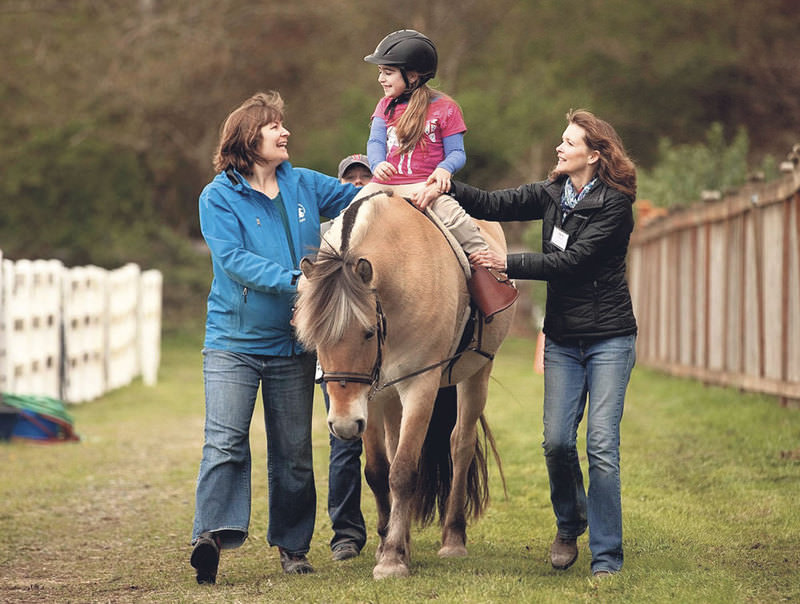 The Jockey Club of Turkey's free equine-assisted therapy course help children with physical and mental disabilities improve their posture and coordination, as well as enhance their neurological and psychological health

Muhammet Kaan Kabak is a traumatized child in Turkey who has re-integrated into social life with equine-assisted psychotherapy (hippotheraphy) at a relatively new racetrack in Istanbul. "I know that they cannot hurt me," said Kabak, 9, speaking about the special bond with his horse. The dark-haired boy deliberately uses the word "hurt" - five years ago, he lost his father.

Although Muhammet had no physical problems and was able to speak when he was only 13 months old - very early compared to his peers - the trauma of his father's death caused him to cut off from the outside world.

Muhammet's mother, Hanım Kabak, 40, told Anadolu Agency (AA): "He was only shaking his head or blinking [to communicate]." Until last year, he was only interacting with his mother. For everyone else, he erected a huge wall of silence, resisting any spoken communication.

Thanks to equine-assisted therapy, one year ago Kaan re-established connection with the outside world. The therapy includes a range of treatments which encompass activities with horses. The Jockey Club of Turkey launched the therapy center named "Apranti" a year ago, to offer this unconventional treatment method to Turkish people. It is based at Istanbul's only racetrack in Zeytinburnu on the city's European side. The equine-assisted psychotherapy that is offered in the center helps such children to develop balance and coordination as well as communication and motor skills. The patient's muscle strength and posture are developed through the sessions and is beneficial for both children and adults.It is becoming an increasingly popular experiential treatment, where individuals and especially children interact with horses in a variety of activities, including grooming, feeding, walking and equine games, to improve their psychological health.

The center was opened on May 14, 2015 during Turkey's Disability Week. Disabled people constitute around 6 percent of the Turkish population (approximately 4.5 million people), according to data from Turkish Statistical Institute (TurkStat) from July 2015. Bercis Merdanoğlu, the chairman of the center and a psychologist, told AA that the club has been doing some charity work and launched this initiative as part of its campaign. "The club invested a lot in this center. We picked up special horses from special farms and trained them for six months," Merdanoğlu said. The Istanbul facility has four horses and 10 staff. Yasin Kadri Ekinci, chairman of the Jockey Club, said that the club has made use of its resources for the general welfare. The center has produced good results although it is only a year old, she said, adding that a similar facility was set up in southeastern province of Diyarbakir in Oct. 20 last year. The two centers have helped at least 700 children.

Merdanoğlu said that she plans to open more therapy centers in other hippodromes in the future. Kaan and his mother have participated in the therapy from the moment the center was launched. "Some people recommended this method to me. That's how I came here," Kabak said. In the beginning, Kaan was hesitant to approach a horse and reluctant to take part in therapy. "After one-and-a-half months, you should have seen how he hugged the horse," said Kabak.

According to his mother, Kaan has established trust with the animal, which paved the way for him to establish communication with other people. When Kabak was recalling the moment his son began to speak, the joy was apparent in her eyes. "He began to send his pictures [while riding a horse] to his friend. Little-by-little, he started communicating," remembers Kabak.

Psychologist Merdanoğlu said that horses help disabled or traumatic kids to regain their confidence. "When a child sees that she can accomplish something and see that other people are below her, she begins to gain her confidence," Merdanoğlu added.

Kaan - now a lively child - sometimes falls to the ground due to mishaps in his riding. Yet these falls do not discourage him or alter his affection for horses. "I want to be a jockey," he says confidently.
RELATED TOPICS