Two of every 100 in Turkey trapped by compulsive cleaning 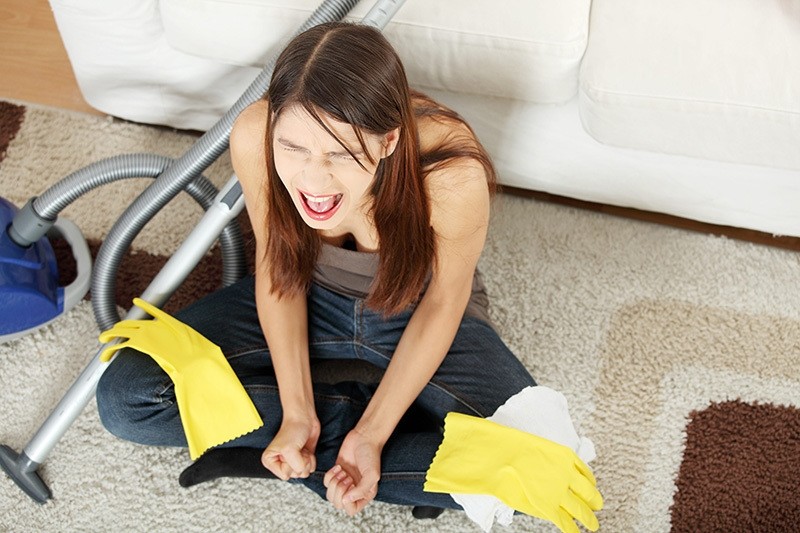 "Think of a day off during which you only scrub, rinse, vacuum, shine and dust. That's me, and I think all these activities have become rituals of my free time."

So says 33-year-old Istanbulite Meltem Özsoy who is just one of those suffering from uncontrolled thoughts and repetitive behaviors about washing and cleaning-an obsession with sanitation.

Speaking to Anadolu Agency, Özsoy says she first noticed something was wrong when she felt compelled to wash her hands more than ten or twelve times a day.

Although outwardly relaxed, Özsoy, a bank employee, confesses to a snowballing anxiety.

"The hand washing turned into clothes, curtains and carpet washing. My whole life revolves around keeping my home clean," she says.

As a widely recognized symptom of obsessive-compulsive disorder (OCD), frantic, prolonged cleaning is increasing in societies across the world.

It can also have serious and life-threatening consequences.

The accidental killing of a daughter by her cleanliness-obsessed mother in central Turkey earlier this year is one such example.

Sixty-year-old Saliha Taşan doused the air-conditioning unit of her Kahraman home with bleach during a spring clean. Her 25-year-old daughter Tuğba Gürbüz was fatally poisoned and three other family members were hospitalized.

According to U.K.-based research center Understanding Obsessive Compulsive Disorder (UOCD), approximately 2.3 percent of the world population between ages 18 and 54 suffer from OCD, which outranks mental disorders such as schizophrenia, bipolar or panic disorder.

In the U.S., approximately 3.3 million people have OCD-about two percent of the adult population-the center says.

According to Reem, an Istanbul-based neuropsychiatry center, two of every 100 people are cleanliness obsessed in Turkey.

Speaking to Anadolu Agency, Büşra Kuzucuoğlu, a psychologist for Turkey's Ministry of Family and Social Policies, says washing and cleaning rituals are the most well-known and widely recognized symptoms of OCD.

"If you are cleaning every hidden corner of your home, washing your hands too frequently and feeling irrational fear or anxiety about keeping everything in order, then you need professional help cause you may be obsessed with cleanliness," she says.

Kuzucuoğlu says the disorder has some sociological roots as well as psychological ones: "The cause of the obsessions and compulsions has its own grounds, depending on the culture."

Turkey has long placed a cultural and religious premium on cleanliness.

"I think there is no village in the Ottoman Empire without a bath", Thevenot observed.

In the Holy Quran, there are a number of verses which emphasize the importance of cleanliness: "Truly, Allah loves those who turn to Him constantly and He loves those who keep themselves pure and clean."

Cleanliness has been also pointed out in many hadiths -- words, actions or habits of the Prophet Muhammad. In one hadith, the prophet said cleanliness "is half of faith".

According to Kuzucuoğlu, symptoms usually start gradually and tend to intensify throughout the sufferer's life.

"But they [the symptoms] generally worsen when you begin to feel more stress about sanitation," she says.

Held captive by her cleanliness obsession, Özsoy says her OCD emerged during her teen years.

"My mother was really obsessed about contamination. Handkerchiefs or tissues were the must-have items in her bag.

"I think that feeling strong urges to keep things clean and in order was given to me by my mom," she says.

Özsoy says that everything turned into a nightmare when she got married two years ago and began sharing a house with her husband.

"It was the first time that I felt that I could not control my obsessions and compulsions," she says.

"I could not stop thinking about washing, vacuuming or laundering-even at work. I did not want my husband to touch anything or sit on the sofa or drink or eat something. But it drove me and my husband insane," she admits.

"I thought life was getting unbearable both for me and my husband and I decided to get professional help," Özsoy says.

Kuzucuoğlu says it is a fallacy that these obsessions and compulsions do not harm other people.

"The obsession with cleaning affects people's social and occupational lives. But above all, it makes them feel unhappy and restless all the time, causing them to waste their leisure time cleaning," she says.

However, according to Kuzucuoğlu, the disorder is highly treatable and requires just a few sessions with a mental-health professional.

"For us, the most important thing is to be aware of your abnormal thoughts and behaviors.

"Then, we, the professionals come in to play. Just believe in yourself," Kuzucuoğlu adds.