Mutilated rhino in South Africa on long road to recovery 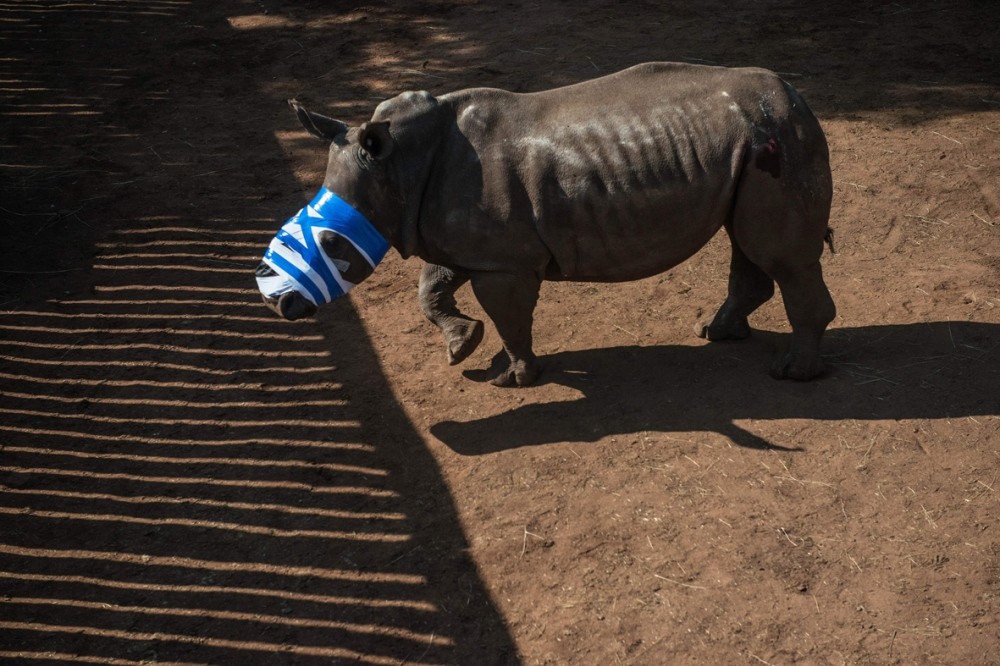 by Jun 07, 2016 12:00 am
Sedated, blindfolded, her ears plugged with cotton-wool, Hope the rhinoceros breathes heavily as veterinarians work to repair a gaping wound left by poachers who hacked off her horns.

A year after being left for dead on a game reserve outside South Africa's southern city of Port Elizabeth, Hope has undergone about 15 operations to reconstruct her ravaged face.

"It has healed 60 percent," he said with satisfaction, stressing that the pioneering medical procedure continues to be a risky experiment.

"We don't know which antibiotics to give, at which dosage, which painkillers to give, we don't even know the basic anatomy," he admitted.

Hope, aged six, has been treated by South African veterinarians organized by Saving the Survivors, a non-profit organization that focuses on rhinos and other wild animals subject to brutal attack or injuries. South Africa, home to around 20,000 rhinos, or 80 percent of the worldwide population, has borne the brunt of a recent boom in international poaching syndicates. The rhino are slaughtered for their horns in the supposed belief that they cure diseases such as cancer in Vietnam and China. Also believed to be an aphrodisiac, the horn is composed mainly of keratin, the same component as in human nails.

Hope survived her attack, and for the past 12 months, Marais and his team have exhaustively tried often unconventional techniques to try to heal and re-seal the gruesome cavity in her face.

But keeping the dressings and bandages in place has been a major problem as the wound gets itchy, so Hope scratches away against fence posts.

"So whatever we put in there she just tears it out," fellow surgeon Gerhard Steenkamp said. "She is so powerful, weighing 2 tons."

The latest attempt to pull together the edges of the wound uses special elastic bands in a technique developed for post-abdominal surgery in humans.

Marais starts off cleaning Hope's wound while chasing away flies attracted by the stench from the wound.

He drills small holes in the skin and sews an elastic band along the wound.

With the anesthetics wearing out, Hope's ears twitch, signaling that the surgery must be wrapped up quickly.

A mosquito net is stapled over the wound, and covered with a large bandage which is then secured with blue duct tape.

Within seconds the rhino hops to her feet, and the surgeons back off quickly, crossing their fingers that the latest dressing will stay in place.

It has so far cost $45,000 to try to reconstruct Hope's face, but for Saving the Survivors, it is money well spent. "When a species becomes endangered, every individual counts because it is genetic diversity," anesthetist Jana Pretorius said.

"If we had 100,000 rhino, then we would probably never do this. But because it is becoming critical, then it makes sense."

With around 25,000 rhino left in the world, Hope embodies the survival of the species.

"We don't just want to treat her because we want to close a hole, she has to fit into the whole conservation of rhinos," Steenkamp said. "What would be success for us is the day Hope has a baby and the day she can be part of the renaissance of the rhinos." These doctors may be at the cusp of a medical victory, and they plan to release Hope back into the wild. In a sign of life after death, a small regrowth of her horn has been detected.
RELATED TOPICS