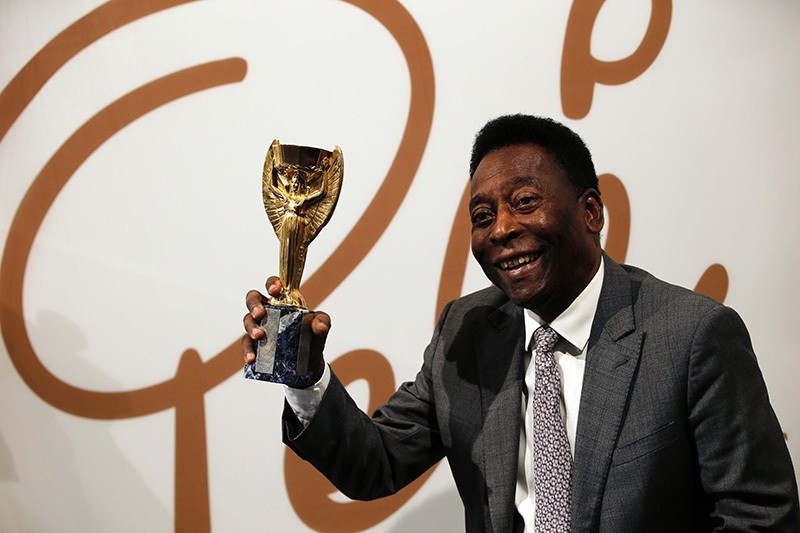 Former Brazilian footballer Pele holds a replica Jules Rimet trophy during an media interview at a preview for an auction of his memorabilia in London on June 1, 2016. (AFP Photo)
by Compiled from Wire Services Jun 09, 2016 12:00 am

Brazilian football superstar Pele's replica of the Jules Rimet Trophy, the original World Cup, has sold at auction in London for 394,000 pounds ($570,00)

The Brazil great was given the copy of the World Cup after becoming the only player to win the tournament three times.

Pele is also selling old passports and his 1970-1972 document sold for 9,500 pounds — more than four times the initial estimate.

Pele says "everybody needs money," highlighting his lack of post-playing career in coaching to earn cash.

Some of the proceeds will go to a Brazilian hospital but Pele wasn't specific on the percentage.

Meanwhile, another football legend, Diego Maradona, hailed his old rival Pele as an "icon" as the pair were reunited for a "match of friendship" on Thursday.

The 75-year-old Brazil great and 55-year-old Argentine legend even embraced during the five-a-side exhibition game in a sign that they have drawn a line under their long-running feud.

"I want to thank Pele, we know who he is and who he will always be. We need icons like him," said Maradona, who starred in Argentina's 1986 World Cup triumph.

"The most important is the message of peace. Many thanks to my friend Maradona for this opportunity and a big round of applause to the players who have been here today," said Pele.

"This is a moment of peace."

It was a far cry from the acrimony between them when FIFA was trying to decide the player of the 20th Century in 2000.

The world body organised an online vote which Maradona easily won. But FIFA thought the online users at the time were too young and so the vote was skewed in Maradona's favour.

It then organised a vote by readers of the FIFA magazine and cast by an international jury. This time Pele won by a landslide.

FIFA decided to split the award and named Pele and Maradona as the two greatest players of all time.