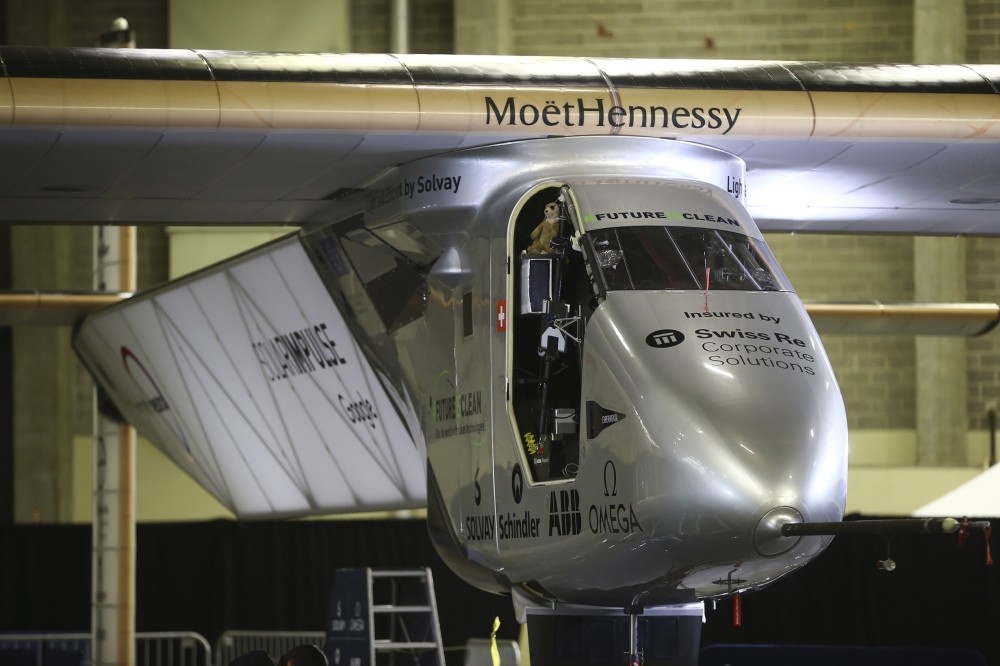 Flights made with the Solar Impulse and Solar Impulse 2 aircrafts have proven that it is possible to fly without any fuel, which promises less pollution at a critical time when energy efficiency is hotly debated

A sun-powered aircraft roving the world made a pit stop in New York to promote the project's clean energy use and multiple adaptations.

Solar Impulse 2 is a behemoth not only because of its 63-meter (207-foot) wingspan but also because of the expansive vision of clean energy that powers it.

"You can fly with no fuel longer than you can with fuel," says Bertrand Piccard, one of the architects of the project and also one of its two co-pilots.

"It's exactly what the world needs today to use energy in a more clever way, in a more efficient way."

Solar Impulse, born in Switzerland, is the brainchild of "two pioneers flying around the world in a solar airplane, to promote clean technologies," according to the project's website.

Piccard, psychiatrist by profession and an aeronaut, along with engineer and entrepreneur Andre Borschberg, began flying their first prototype in 2009.

Since then, they've been hard at work to complete a journey around the globe on a fixed-wing plane solely powered by the sun, and they have the mileage to back their claim.

Piccard and Borschberg have so far traveled nearly 30,000 kilometers (19,000 miles) in 14 flights, with a total flight time approaching 400 hours.

"Today, you can divide by two the energy consumption of the world - and therefore the co2 emissions - with clean technologies that at the same time produce profit, create jobs, stimulate the industrial development, and economic growth," Piccard told reporters Monday at the John F. Kennedy Airport after the aircraft landed in the city early Saturday.

"All these technologies we have on the plane can be used everywhere for electrical mobility, for insulation of houses, for lighting systems. Solar Impulse is like a flying smart grid."

And indeed it is. Last July, the pair was able to complete a 7,200-kilometer (4,500-mile) continuous flight from Japan to Hawaii, and though they flew only in good weather, the level of innovation is likely to permeate many aspects of the economy in the future, according to Piccard.

"Even if there was no climate change, it would make sense. It would be logical to have these technologies - more efficient - coming on the market. "So you don't need any more to be ecological as long as you are logical, and this is the message of Solar Impulse."

The crew was visited Monday by U.N. Secretary-General Ban Ki-moon and Piccard was excited to be able to share the project's story with the international leader. "When we have the secretary-general of the United Nations visiting the plane, it's clear that for me, it is one of the highlights of this project because this is why I initiated this," he said. "To try to make a difference with the spectacular demonstration in the air but make a difference on the ground for users of technology and for the population."

Asked whether one day commercial airplanes could depend solely on solar energy, Piccard was humble but hopeful.

"Commercial airplanes only on solar energy; I would be crazy to say yes and stupid to say no. Because today we don't have the technology for it but the Wright brothers neither had the technology to fly with passengers in 1903. And nevertheless, it happened. So what we need in the beginning are pioneers."

As one can imagine, the journey hasn't been all smooth sailing. The pilots typically fly solo. Borschberg, who flew for five days and nights on Solar Impulse 2 for the Japan-Hawaii flight, said there were times when the project looked to be going downhill as some became frustrated when the project encountered obstacles.

"When I left Japan for the five days, five nights flight, one of the important [pieces of] equipment in the airplane didn't work. And as you can expect, the engineers told me that I had to return to Japan to fix the airplane," according to Borschberg.

"When the weather improved enough for the flight to restart, engineers were still on the fence. "When we discussed with them what we should do, we agreed that at the end I could manage the efficient parts, but we had to take advantage this time of improving weather. The overall risk was fine. But the engineers didn't understand that," he said. "They created lots of emotion, people wanted to resign. So we had to solve the crisis at the same time as flying the airplane and continue to our destination. There are moments where you believe that's the right decision, but it needs a lot of convincing to bring everyone basically on the same wavelength and working in the same direction." With favorable weather conditions, Solar Impulse 2 plans to resume its journey within a week, when the pilots hope to set out for Europe.
RELATED TOPICS