New geopark to be built on Nemrut Crater Lake 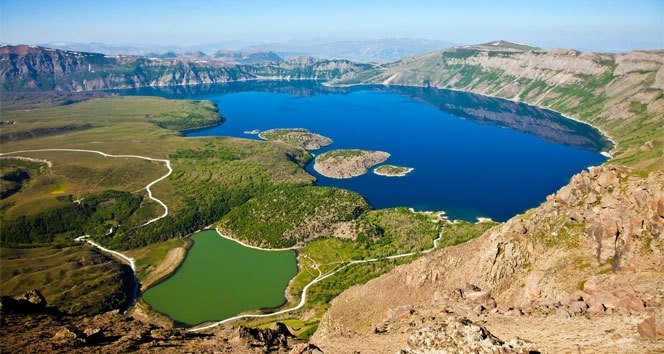 by Anadolu Agency Jul 01, 2016 12:00 am
Nemrut Crater Lake, the world's second largest crater lake, is currently the site of the construction of the "International GeoPark Project."

Academics will conduct studies on the crater lake, which received an award for excellence from the European Destinations of Excellence (EDEN) project. The studies have been launched by a team of seven under the coordination of Professor Aydın Büyüksaraç, the vice chancellor of Bitlis Eren University. The project, which has been done with the support of the Eastern Anatolia Development Agency (DAKA), is expected to contribute to Bitlis' tourism and economy.

Professor Büyüksaraç said Nemrut Crater Lake is a unique geographic creation, since it is located between the largest volcanic mountains in the region, as well as Mount Nemrut. He said: "We will conduct studies on geologic creation, endemic plants, animal species, other lakes in the region and archaeological settlements at first. There are historical records of two active volcano's in Turkey: One is Mount Erciyes and the other is Mount Nemrut, which was last active in 1941. The volcano, which was first active roughly 600 years ago, is currently an active but dormant volcano."

Due to the volcanic eruption of Mount Nemrut, five different crater lakes came into being. "The lake's average depth is 100 meters, which is a very deep creation. The surrounding of the lake is as high as four meters. The top part of the crater is 46 kilometers wide, while the bottom is 36 kilometers wide. The crater is conical in shape," added Büyüksaraç.

Following the necessary studies in the region, the scientific team will present the reports they prepared to the United Nations Educational, Scientific and Cultural Organization (UNESCO) and will work for Nemrut Crater Lake to be recognized and accepted by UNESCO on the international geopark list. Büyüksaraç claimed that if the crater lake is recognized by UNESCO, Bitlis's tourism will be boosted and the region will be the second geopark in the world. "The region will attract international tourists as well because there are so many natural creations. Moreover, I believe that the region will also be a hub for nature sports. As it gets a lot of strong winds, the region is also suitable for paragliding. Tours can be organized to hike to other natural areas. Nemrut has great potential for tourism as an alternative destination," he concluded.
RELATED TOPICS