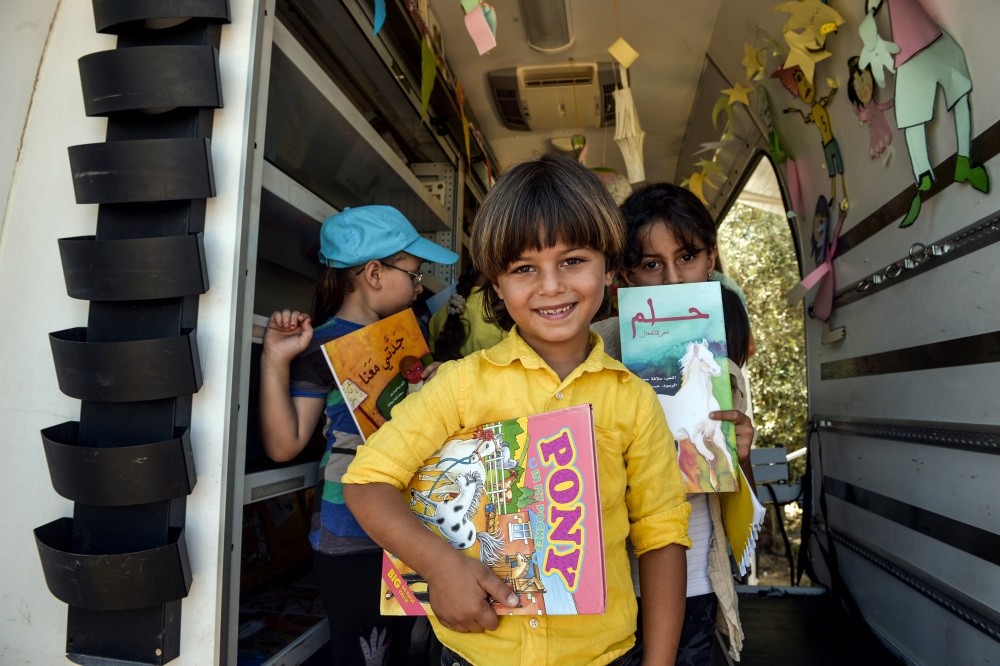 by Anadolu Agency Jul 13, 2016 12:00 am
The German-French Cultural Center brought a traveling library vehicle to Gaza from the West Bank on May 16, which aims to instill a love of reading in children by enabling them to read books at colorful chairs and tables. The traveling library which remain in Gaza until August, and made its first stop in the Huzaa town of Khan Yunis province, one of the main targets of Israel's attack on Palestine in July 2014. Children living in Huzaa previously had no access to a library. Thanks to the traveling library, children are able to enter the magical world of books, drawings and enchanting stories, as well as spending time with the staff of the library enjoying entertaining activities.

Mahmud al-Askalani, the coordinator of the traveling library, told Anadolu Agency (AA) how the library works: "The traveling library offers its services in Gaza three months a year. Then we will head to West Bank and open the doors of the magical world of the books to children living there."

Askalani said that they want to encourage Gazan children to read more, and the library gives children a chance to choose their own books, read out loud and discuss what they have read. He said that the traveling library usually goes to places where there is no access to libraries. "Since there is no library in the region, children have a hard time improving their vocabulary and ability to think analytically," said Askalani, adding that they offer library services to as many as 30 children between the ages of eight and 14.

Muhammed Mikdad, who supervises the children, said that the children show great interest in the traveling library, since they live in remote regions deprived of many opportunities. "Most of the children are very eager to listen and read the stories and improve their language," Mikdad said, claiming that these kinds of activities have positive effects on children who were exposed to the Israeli attacks.

Hala Ebu Ruk, 1, said: "I usually spend my summer helping my mother at the house. With this library, I have a chance to spend my spare time in a useful and entertaining way." She also said that she hopes that a library is established in their town in the future. The German-French Cultural Center was co-founded by the Goethe Institute in Jerusalem and the French Cultural Center in Ramallah.
RELATED TOPICS