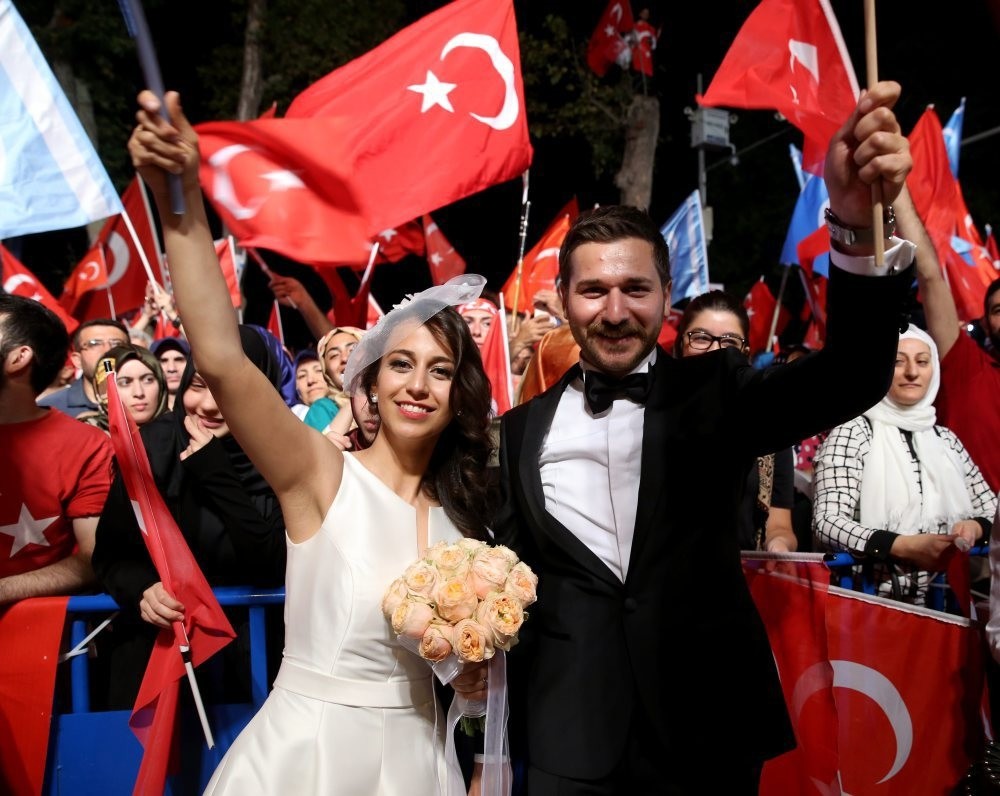 A newlywed couple at a u201cdemocracy watchu201d in Ku0131su0131klu0131, Istanbul.
by Compiled from Wire Services Jul 29, 2016 12:00 am
People are continuing to take part in "democracy watches" or "vigils," gatherings denouncing the coup attempt, every night around Turkey following the Gülenist attempt to seize power over the country. Some couples have even shown their support by having their wedding ceremonies in public squares during the watches. In Kırşehir, a small Anatolian province, Ayla Ürün and Harun Cingöz got married during a democracy watch this week in the city's Cacabey Square. "We previously scheduled our wedding in a hall but thought our decision would be more memorable here as we want to show our support," Cingöz said.

Similarly in Karaman, newlywed couples have appeared in public squares in their bridal dress and groom's suit to join the democracy watches. Newlywed couple Pınar Peksoy and Yakup Peksoy and Büşra Kalaycı and Ali Menekşe, who got engaged, also joined the democracy watches instead of having a ceremony with their friends and families. In Nevşehir, another newlywed couple Ahmet Kayacı and Reyhan Kayacı celebrated their wedding while joining a demonstration at a public square. Kayacı said, "We wanted to share our happy day with others and join them to show the Turkish people's solidarity. We are proud of ourselves and are here for Turkey."

In Zonguldak's Çaycuma district, Aynur Doğan and Ömer Doğan joined a democracy vigil by holding Turkish flags after their official marriage ceremony. "Even before our wedding, we were joining the public in the squares," Aynur Doğan said. "No one can oppress us, we will show our support even at our wedding," her husband Ömer Doğan said. Every evening since the July 15 failed coup attempt, celebrities, public figures and politicians have been rallying crowds at gatherings, which are usually followed by convoys of cars draped with flags. All these rallies and democracy watches have showcased the unity of the nation against the coup. In different cities, crowds on the streets honk horns and chant slogans in support of the state, denouncing Fethullah Gülen, the prime suspect in the coup attempt, which is blamed on his Gülenist Terror Organization (FETÖ).
RELATED TOPICS