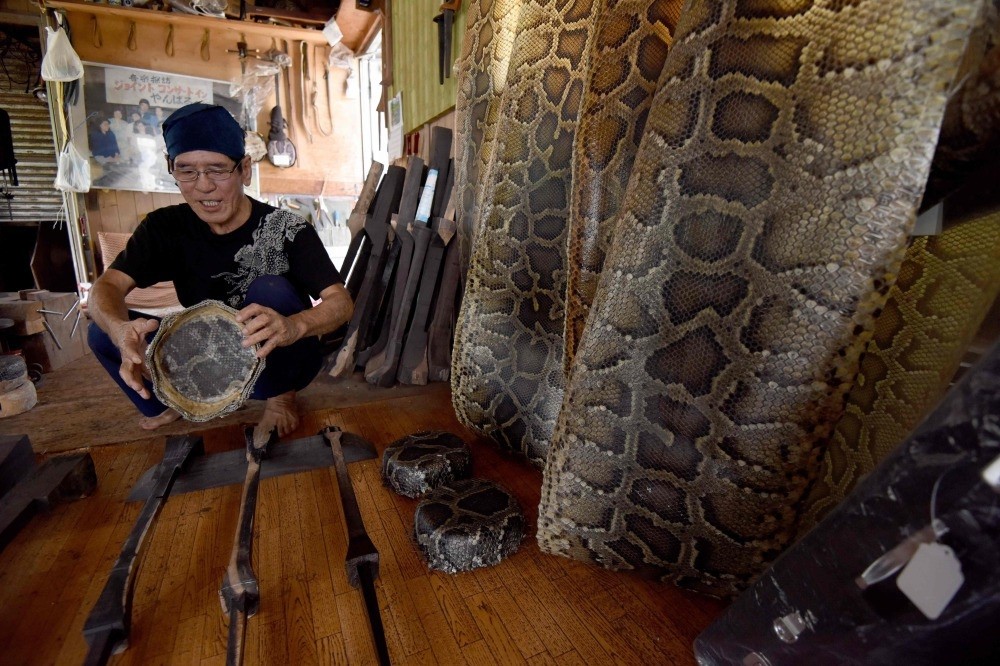 by Aug 10, 2016 12:00 am
Enormous python skins hang from a wire inside the sweltering workshop where Seibun Nakamine sculpts a piece of Okinawa's musical identity. They are essential for the wiry 69-year-old craftsman who has spent nearly half a century making the three-stringed sanshin.

The snakeskin-covered instrument, similar to a banjo, sits at the heart of the sub-tropical island chain's rich musical history. It's contagious, twangy sound is a fixture at weddings, festivals, and other celebrations.

Sitting on the wooden floor of his tiny studio, a pair of huge ox horns on the wall above, Nakamine sees his work as much more than assembling an instrument which can take several weeks to make and cost as much as $5,000. Crafting a sanshin - which means three strings in Japanese - from ebony wood is like giving birth to a child, he said. "When I sell them to musicians, I feel like I am marrying off my daughter," Nakamine said.

"The art of making the sanshin is based on really old customs. It's complex, but very exciting to do.

"It's my job to figure out how to craft its body from the middle with the best possible balance and in the most beautiful way," he added.

Nakamine - who has already chosen the sanshin music to be played at his funeral - is part of a dying breed.

He estimates there are only about 50 professional sanshin makers left in Okinawa these days.

The archipelago, which sits about 650 kilometers southwest of the Japanese mainland, was once home to the independent Ryukyu kingdom until it was annexed by Tokyo in the late 1800s.

For hundreds of years before that, Okinawa had strong links with China where a similar three-stringed instrument, the sanxian, served as a model for what would become the sanshin and, later, the Japanese shamisen.

Okinawa, the scene of some of World War II's heaviest fighting, became a US colony after Japan's surrender in 1945. It was returned to Tokyo's control in the early seventies.

During the tough post-war years, some Okinawans resorted to a makeshift version of the instrument made out of a piece of wood and tin can.

"Playing the sanshin was a comfort and helped to relieve the stress," said musician Tatsuo Chinen at a bar in the capital city Naha that specializes in sanshin music.

But Chinen thinks the sanshin is not only an instrument of the past.

"There are many young people who are now interested in this instrument," he added.

For many though, the sanshin remains a powerful reminder of Okinawa's history, and its soulful sound can mirror a vast range of emotions, from intense sadness to bubbling joy.

Sometimes that joy translates into islanders opting to play sanshin music - or listening to a performance - instead of working, Nakamine joked.

"It's my opinion, but if you ask me, Okinawans like fooling around," he says.

The sanshin has now crossed over into other more pop and rock-like musical styles among Okinawan bands. And so Nakamine tries to match what he creates to the voice and musical style of his clients.

"If you try to determine the sanshin's sound when it's done being made, you're already too late," he added.

"That won't answer a customer's needs."

The craftsman's sun-wrinkled hands are a hot commodity and his order backlog can sometimes stretch back more than 10 months.

But it's not his opinion of the work that counts most, Nakamine said.

"The musician judges whether a sanshin is good or bad," he said.

"As craftsmen, we do our best to make a great instrument. But in the end we're only (working) in the shadow of the musician.