Bid to save South African language on verge of extinction 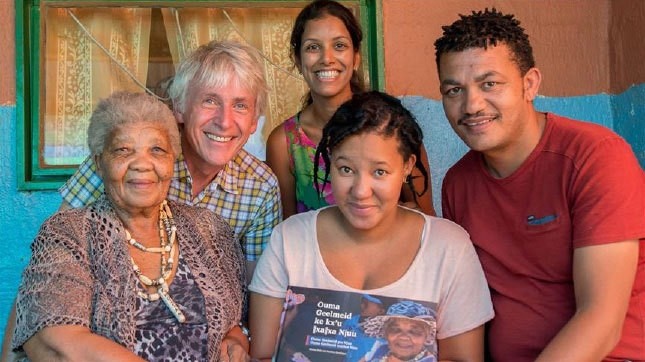 Listed by the United Nations Education, Scientific and Cultural Organization as critically endangered, Nluu, an almost extinct South African language, has drawn the attention of linguists in an attempt to revive the language and teach new generations

In the small town of Upington located on the banks of the Orange River, Ouma Geelmeid sits in her courtyard classroom teaching one of the world's most endangered languages. The 84-year-old is one of the remaining handful of speakers of the Nluu dialect of the Nllng language and she has made it her role to pass it on to Northern Cape province's indigenous people.

Her efforts are not isolated, as the Center for African Linguistics and Diversity (CALDi) at the University of Cape Town has developed materials for teaching Nluu. "We had to simplify the complex linguistic style into something that anyone in the Khomani community could understand," Matthias Brenzinger, the center's director, told Anadolu Agency (AA). "The challenge was not to let any of the pronunciation and language expressions get lost in the process, and that's where Ouma Geelmeid comes in."

Nluu has one of the biggest speech sound collections in the world. CALDi's workbook on the language states that it has "45 click phonemes, 30 non-click consonants and 39 vowels." This amounts to more than 100 speech sounds - far more than English, French and Arabic, which have fewer than 50 variant sounds.

Brenzinger, a German-born linguist, explains that the histories of a people and language are distinct because people do not lose their heritage simply by virtue of speaking another language. "These languages don't split like a historical tree, as the Indo-European languages do," he said. "People and languages shift differently. Languages become similar and dissimilar simultaneously as people diversify by branching into other regions and interact. So a people's history will differ from their language history." Nluu is the last surviving tongue related language to !Xam, an extinct indigenous language that is inscribed on South Africa's coat of arms. It has been listed by the United Nations Education, Scientific and Cultural Organization as critically endangered, which is one step away from extinction.

The San people, once hunter-gatherers, date back 80,000 years and have spread across the region in nomadic communities. Over time, pastoral populations entered the region from northern inland areas and intermarriage with hunter-gatherers influenced San languages and culture.

South Africa's national languages of isiXhosa and isiZulu emerged from Bantu speakers who arrived afterward and adapted the San clicks that can be commonly found spoken in the country today.

The number of San dwindled in the 18th century after Dutch Boer colonialists settled and a new concept of land ownership entered San culture.

The San believed that the land belonged to everyone but the Boers claimed property and built farms. Conflicts for resources between herding farmers and the San erupted when animals became scarcer for the San to hunt. Brenzinger related the gory historical tragedies when the Boers hunted the San for sport. Some accounts say that as many as 100 San could be killed in a single weekend.

When apartheid became the law of the land in 1948, the oppressive racial system erased the distinct identities of the San, Cape Malay, Griqua and mixed ethnicities by shoehorning them into an umbrella grouping called "colored."

It was by this time that the hunter-gatherer lifestyle of the San had already come to a close and the spoken San languages that once existed in the country were suppressed by law.

It was only many decades later, in the 1990s, that liberation struggles and local and international pressure led to the collapse of apartheid. South Africans became free to identify themselves according to their heritage.

This platform brought a resurgence of forgotten histories to the fore and it was against this backdrop that South African-born linguist Nigel Crawhall and his colleague Levi Namaseb, from neighboring Namibia, found 20 Nluu speakers in the Northern Cape.

Unfortunately, the surviving speakers were old, which led German and American linguists to rush in to record the language.

By the time Brenzinger came to Cape Town in 2012, there were only seven speakers left, and although the language existed on paper, there was not much to preserve it as a living tongue for the local Khomani community. The CALDi, which Brenzinger founded four years ago, took a different approach to African linguistics. It set out to have African languages studied by African speakers. "As an outsider, you will never completely understand the concepts of a language," he said. "It is important to have mother-tongue speakers analyze their [own] language."

Three living speakersThis led Brenzinger and his British colleague Sheena Shah to tirelessly translate the technical linguistics jargon into a teaching workbook that the only eligible non-literate Nluu speaker, Geelmeid, could use to teach local children.

Claudia du Plessis has been assisting her grandmother Geelmeid in teaching classes three times a week to 30 to 40 young children eager to learn Nluu.

Each child is given an animal name in the Nluu language and the curriculum teaches parts of speech, grammar, simple conversations and even church songs.

The lessons are taught in the Oranjerivier Afrikaans dialect, one of South Africa's 11 official languages.

It was four years ago that Geelmeid was given a small building to teach Nluu by the Pan South African Language Board, which honored her with the special award for the Most Dedicated Community-Serving Individual of the Decade.

She also received the National Order of the Baobab from President Jacob Zuma for her "excellent contribution to the preservation of a language that faces the threat of extinction," according to local news reports from the time.

Although Geelmeid became the only female chief in South African history last year in recognition of her efforts to revive Nluu, she still lacks adequate funding to maintain her school.

Brenzinger said: "South Africa already has 11 official national languages, which is already quite a lot on an international scale. So those languages are prioritized when it comes to funding, leaving Nluu as less important."

The three living Nluu speakers from the older generation are Geelmeid and her sisters, all of whom are well over age 80, which foreshadows a huge loss for the language in the decades to come.

Claudia du Plessis, Geelmeid's granddaughter, is fluent in the language and is the first to be able to read Nluu at an expert level but has chosen to undertake studies in community development, leaving the legacy at this point to her elders.

There is also the resurgence of the Nama people of South Africa, Namibia and Botswana that has begun to bloom in the region, which may attract those in the community to identify with the larger support base of the Khoe as a way to reconnect to their heritage. The challenges facing Nluu may see the language fade into history, but Geelmeid is not ready to give up the struggle to see her people's beloved language saved from the ravages of time.
RELATED TOPICS