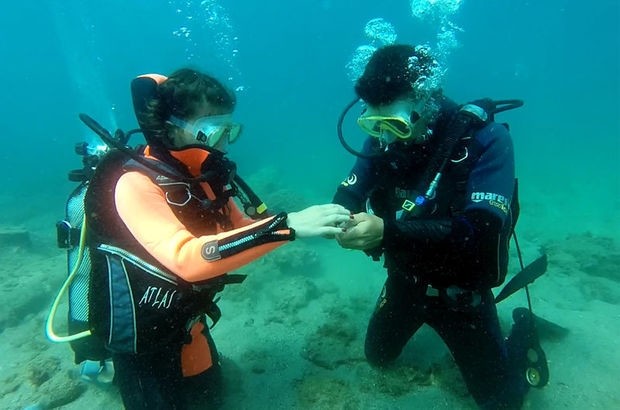 by Daily Sabah with AA Aug 12, 2016 12:00 am
Opportunities for diving tourism along Turkey's Aegean coast are rising, beginning with submerged airbus planes and battleships. In Kuşadası, a coastal town in the province of Aydın, diving centers are becoming a hot spot for couples to propose marriage.

Diving into an Airbus A-300 cargo aircraft following a professional diving team, Burak Filiz proposed to his girlfriend, Şükran Güner. During their holiday in Kuşadası, the couple first took diving training and Filiz persuaded Güner to explore the submerged aircrafts on an adventure tour. The couple explored underwater and then Filiz surprised his girlfriend by proposing through opening a banner. With great excitement, Güner said, "We took a four-day diving course and I was really excited. I was afraid at first but my trainer encouraged me. After Burak proposed, I did not know what to do."

Another couple, Çağrı Göker and Hatice Erge, dove together and Göker proposed to Erge underwater. "I did not expect this. I lived my happiest moment underwater," said Erge.

The Airbus A300 was not the first plane to be submerged for underwater tourism in Turkey, as since 2009, there were three other small-sized planes that were sunk off the southern province of Antalya in the districts Kaş and Kemer. Another plane was sunk in the Akçakoca district of the northwestern province of Düzce to serve as an artificial reef.
RELATED TOPICS