Authentic cultures to be revived at Ethno Sports Fest 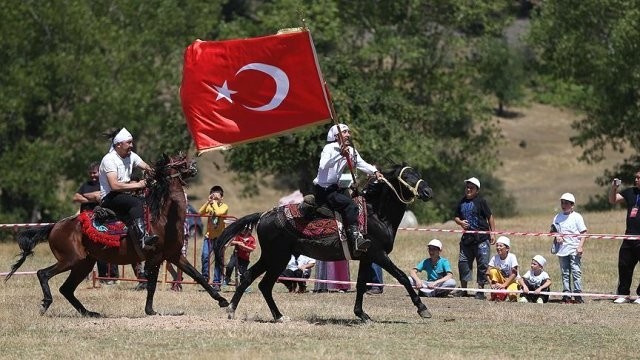 The World Ethnic Sports Confederation will hold the Ethnic Sports Culture Festival in Istanbul's Küçükçekmece district from Aug. 26 to Aug. 28. The World Ethnic Sports Confederation aims to revive traditional sports and turn them into professional disciplines so that they can be included in the Olympic Games. They will host 20 teams from around the world that will complete in 11 different branches of sport, including mounted archery, oil wrestling, javelin, "gökbörü" (catching a goat on horseback) and "mangala," a traditional Turkish mancala game.

Küçükçekmece Municipality mayor Temel Karadeniz has supported the event right from the beginning and used every means available in the district to make it a success. Many accomplished and the promising young sportsmen will perform During the Ethnic Sports Culture Festival. Veteran oil wrestlers, such as Harun Doğan, Ali Işık Yıldızlar, İsa Göçen and Orhan Okulu, and promising sportsmen of mounted archery, such as Yusuf Kilci and Janset Genel, will display their talents at the games.

A total of 35 traditional Turkish large nomad tents and a market place have been set up in a huge complex within the scope of the festival. The festival area features many different venues and will host numerous events during the games. Food stalls will offer traditional Central Asian and Anatolian meals and refreshments and there will be workshops for traditional weaving, pottery and ornaments will be held for both children and adults to pass these ancient traditions down to the next generations. The artworks created in these workshops will be demonstrated at various exhibitions as well.

The event area where participants can set up their own tents will also witness the revival of authentic Central Asians and Anatolian festivities including a Kyrgyz wedding and oil wrestling matches for amateurs. Under the guidance of the Archery Lodge, interested parties will be able to practice archery and children will have a chance to learn how to ride a horse in addition to a total of 15 traditional games.

Apart from numerous live performances by musicians and an Ottoman Military Band, Kyrgyz folk poet Aslanbek Sultanbekov, the composer of popular song "Dombıra" and his band will take the stage and perform the best examples of Central Asian music. The festival will be overseen by high ranking officials and welcome 80 horsemen to revive age-old traditions.

Here are some of the games that will be featured at the Ethnic Sports Festival:

Mangala is a mind and strategy game that influenced a large geography, from the tribes in Central Asia to the Ottomans. The most important feature of the game is that it can be played by people of every age and the players are not restricted by place or material. The game is played by two players and 48 stones on a 2x6 or 2x7 mancala board or pits. At game setup, five pieces are placed in each pit. At his or her turn, the player takes all the pieces from one of his or her pits and drops them one at a time into the following pits counterclockwise. The game ends when all the pits are empty. The player who captured at least 25 pieces wins the game. Vision, patience, strategy and a cunning mind are required.

Gökbörü is one of the traditional equestrian sports of Central Asia. The game was played during wedding ceremonies and local entertainments and it has managed to survive until present times under the name of "catching the prize" in certain regions of Anatolia. The goal of this game is to catch a runaway goat on horseback. The riders take their positions in a circle which defines the playground and ride their horses towards the goat which is called "şikar" and try to catch the goat by sliding on their saddles. The rider that catches the goat begins to run away from the other riders as they try to snatch the goat from his hands. If the rider manages to ride a full circle around the playground with the goat, he scores and puts down the goat. Another rider catches the goat and the game goes on. The rider which scored the most points win.

Belt wrestling is a popular game among Crimean Turks and is performed on soft soil or a green field and accompanied by drums and a clarion just like other wrestling types. Belt wrestling matches take place for entertainment. Wrestlers are categorized into three groups according to their heights and weights. Each wrestler tries to put his opponent's shoulders on the ground by pulling him from the belt that is wrapped around wrestlers' waist.

Aba wrestling is one of the oldest wrestling types in Central Asia. The wrestlers wear an aba (coarse woolen cloth) and wrap special belts around their waist before they wrestle. This ancient sport is still practiced around Turkey's southeastern provinces of Gaziantep and Hatay, however, it shows differences from region to region. Aba wrestling is pointed out as the first example of judo and the pants wrestling in Sweden as aba wrestling is the world's first known wrestling type performed with clothes.

Mounted javelin is the Turks' ancestor sport, originated in Central Asia and has been played for centuries. The game came into being to practice warfare on horse. Mounted javelin is mostly payed for show. The javelin thrower throws the javelin to his opponent. The opponent makes certain athletic moves on horseback to avoid the javelin. Some sportsmen follow their opponents until they achieve line of sight and then throw their javelin. If they hit their target, they score. Scoring is determined by the sportsmen prior to the game.

The history of mounted archery goes back centuries among the Turks. Throughout history, Turkish mounted archers were known for their ability to turn their back and shoot their arrows while they rode their horses. Hunting was their main source of income and livelihood and warfare helped Turkish mounted archery to improve. Archery also held a great importance in the social life of the Turks next to warfare and hunting. For instance, archery competitions used to take place during national holidays, religious ceremonies and weddings.

Shagia is a historic Turkic game played with the astragalus bone of the ankle of a sheep or goat. It is possible to come across this game, which has been played since ancient times, over a vast geography of Turkish settlement, from Turkistan to Turkey. Shagai is still played in villages, towns and even metropolises in Turkey. The shagai pieces are divided into equal numbers among the players and the pieces are lined up side by side in a circle which defines the playground. Later, the players take larger shagai pieces in their hands and throw them to the pieces in the circle in order to push them out of the circle. The shagai piece which is thrown out of the circle is given to the player who made the throw. If a player overshoots, he or she losses their turn in the game. The first throw is made from a certain distance from the circle; the later throws are made from the end of the circle.