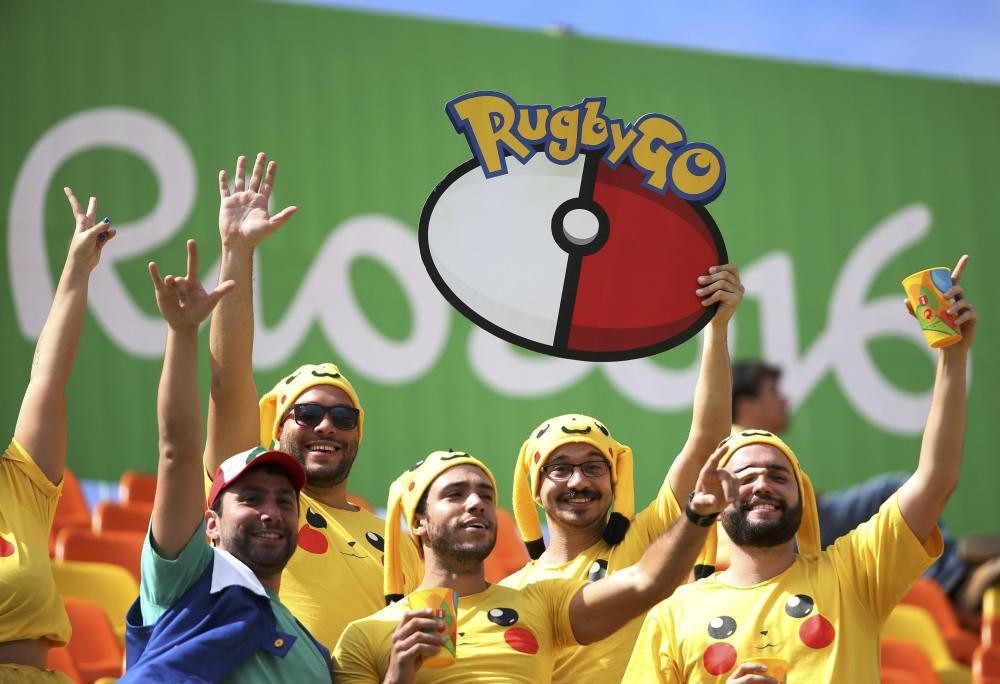 Rugby fans dressed as Pikachu from u201cPokemon Gou201d watch from the stands.
by Aug 15, 2016 12:00 am
Forget beach volleyball, soccer or tennis, not to mention the steeplechase or discus. Pokemon Go is challenging the Olympics for most popular game among some young Brazilians.

Hundreds of them turned out in a Rio de Janeiro park on Saturday holding their mobile phones to hunt for virtual creatures in the hyper-reality game app that has become a craze in Brazil since its release two days before the Games. "I went to a football game to see Brazil play Sweden, but after Pokemon Go started I lost interest," said student Lourdes Drummond at the Quinta da Boa Vista park, once the gardens of the Brazilian royal family.

The blockbuster game developed by Niantic, in which Japan's Nintendo Co has a large stake, uses augmented reality and GPS mapping to make animated characters appear in the real world. Players see creatures overlaid on the nearby landscape that they see through a mobile phone camera.

Brazil's third largest mobile phone company Claro estimates that close to 2 million of its users have downloaded the game just in the Rio area since it was released on Aug. 3. An executive of the company owned by Carlos Slim's America Movil said more than half of those users had been inside or near Olympic venues hunting for Pokemon. Even athletes have been addicted to the game. Japanese gymnast Kohei Uchimura downloaded the app when he got to Brazil for pre-Games training before Pokemon Go was launched in the country. He ran up almost $5,000 in international phone charges.

That did not stop him winning two gold medals and becoming the first man to claim back-to-back all around titles in over 40 years, and only the fourth in history. As Rio residents rode paddle boats on the lake of the Boa Vista park, youths explored the grounds seeking Dragonite and other prized Pokemon to add to their collection. They huddled in the shade of the 19th Century royal palace to swap tips.

"There is no interest in the Olympics here, just how to get to the next stop where there are the most Pokemon," said sociologist Joao Carlos Barssani, 31, himself joining the hunt. When a boy shouted "I found one!" dozens sprinted after him in pursuit.

It may not be a physical sport, but the novelty of Pokemon Go is the mobility involved compared to traditional video games. You have to get up and go outside to search your city cellphone in hand to accumulate as many Pokemon as you can. "Before I never left home. Now every time my mother wants me to do any shopping, I'm out the door," said Rafael Moura Barros, an IT student who believes the game will help reduce obesity in Brazil.

Barssani said the game was changing the way Brazilian were using their urban space in cities long plagued with high crime rates. People are frequenting parks and squares that had been abandoned for fear of getting mugged, he said. "It's good to have lots of people around you, so your phone doesn't get robbed," said student Leonardo Perreira.