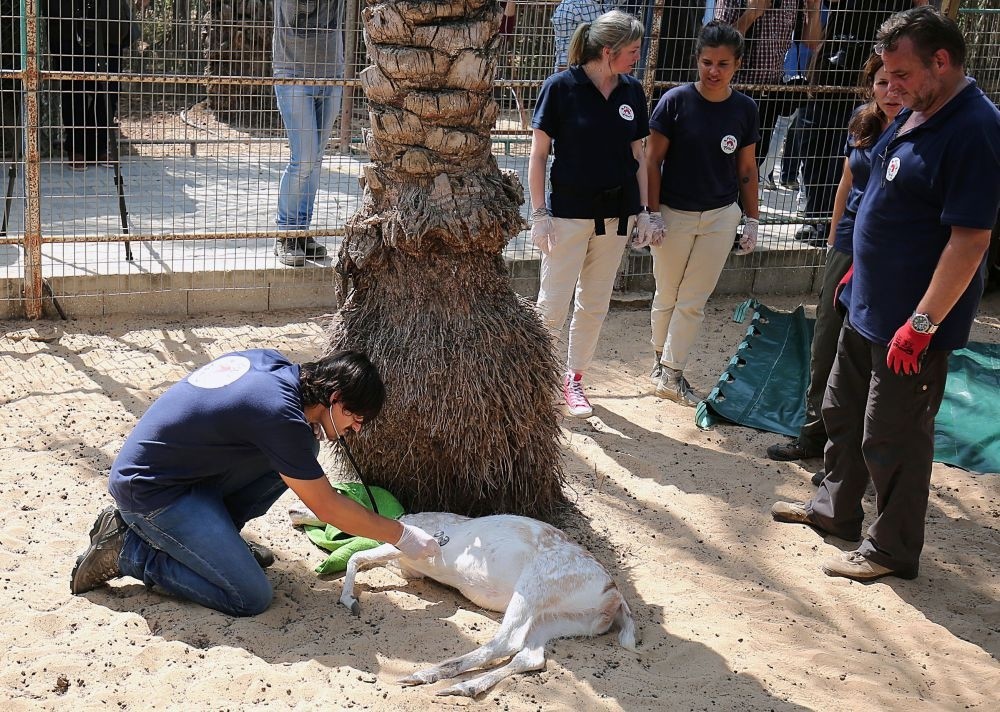 A member of animal welfare charity ,Four Paws, checks a sedated deer at the zoo.
by French Press Agency - AFP Aug 25, 2016 12:00 am
A team of foreign veterinarians began taking measures on Tuesday to evacuate the last surviving animals from a zoo in the Gaza Strip that has been dubbed "the world's worst." In front of each cage of the zoo in Khan Yunis, one of the vets stops and fires an anesthetic dart into monkeys, birds, porcupines, and the only tiger in the Palestinian enclave.

Three foreign vets and their assistants took part in their seventh and final visit on Tuesday, carefully sedating animals for medical examinations, before they were taken out of the strip. The animals underwent a series of ultrasound scans and vaccinations before crossing the Erez checkpoint into Israel on yesterday morning. For months, Amir Khalil, an Austrian vet of Egyptian origin, and colleagues from the Four Paws non-governmental organization, have made regular visits to the zoo in southern Gaza. "Khan Yunis Zoo has been known as the 'worst zoo in the world' since it became public last year that the zoo was crudely mummifying the animals that died in their care and displaying them," Four Paws says on its website.

"Four Paws has been active in providing emergency food and supplies to the animals, but now we have the chance to rescue them all for good." At one point in the past there were more than 100 animals housed at the zoo, but they were decimated by repeated wars and shortages of customers. There were just 15 animals remaining, including a gazelle, pelicans, as well as the monkeys, porcupines and tiger. But yesterday they took the road to Israel and then to Jordan.The tiger is traveling to South Africa, but will stop in Israel to be transferred to a cage adapted to air transport, said Khalil. After that the Khan Yunis zoo will permanently close its doors. "I am very sad," laments owner Ziad Aweda.

"I brought these animals from Libya, Sudan, Egypt and even South Africa to Gaza," he said. They are now going in the opposite direction "because of the harsh conditions of life, the weak economy and the severe blockade." Hamas, which runs Gaza, has fought three wars with Israel since 2008, the most recent in 2014 in which 2,251 Palestinians died, the majority civilians, according to the United Nations. The Israeli blockade of the enclave and Egypt's closed border have suffocated the economy, with Gazans no finding it more and more difficult to find money for leisure.
RELATED TOPICS