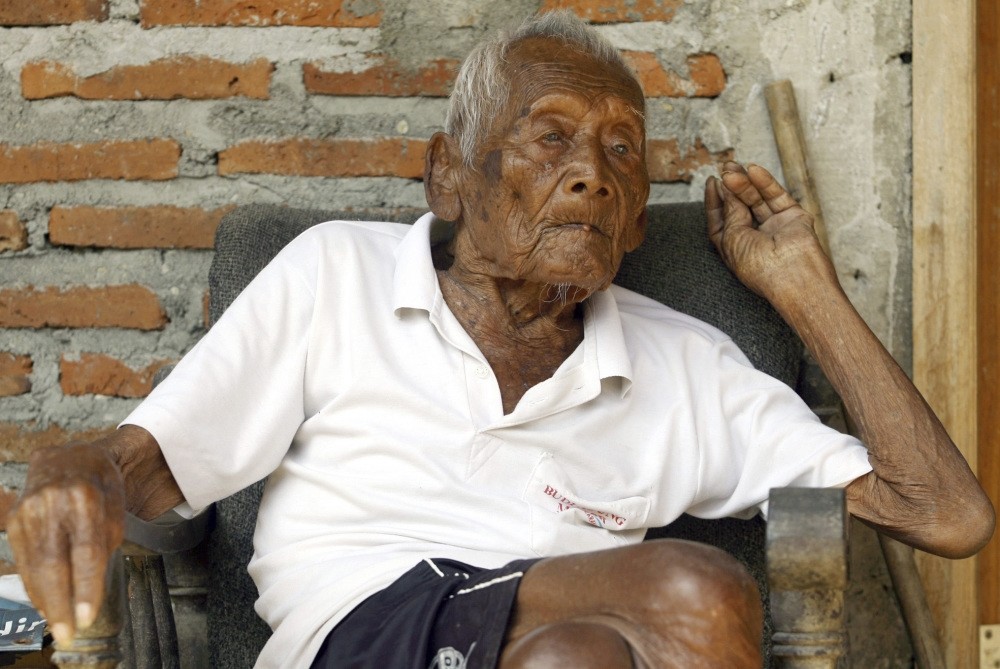 by Anadolu Agency Sep 09, 2016 12:00 am
The greatest fully authenticated age to which any human has ever lived is 122 years, yet every year new challengers make claims to the throne.

In January, the son of a Turkish man living in Siirt in southeast Turkey presented his father's case for the title - although his claimed age of 125 is still to be verified - and this month it is the turn of Indonesian man Sodimejo, whose friends call him Gotho.

Based on his identity card, Gotho - many Indonesians have only one name - was born in December 1870, which makes him 145 years old.

Gotho's grandson, Suryanto, told Anadolu Agency on Wednesday that his grandfather is the last of 11 children, and he has outlived his four wives and four children, including Suryanto's mother who died in 1992 aged 63.

Gotho now lives with his 46-year-old grandson in a village in Sragen regency, Central Java, who says that the only memory his grandfather now has of his youth is of a sugar factory that opened nearby in 1880 during the Dutch colonial era.

"He still has memories of the inauguration of the factory, which has been an important signifier for authorities to determine his age."

Suryanto says that since he was a little boy, he has no memory of his grandfather suffering any serious illness and his health has hardly changed.

"[But] last year, he began to get a little weaker, especially his legs... He can't watch TV due to a problem with his eyes, but he is continually listening to the radio," and smoking his favorite brand of cigarettes.

"He can still eat and drink on his own, but if he needs to shower I help him walk."

In 1990, Suryanto says his grandfather asked him to buy a headstone as he expected God to take him soon.

"Being patient and accept [the grace of Allah]. Do not be too ambitious to pursue things that are beyond our ability," he says is his grandfather's advice for a long and healthy life.

French woman Jeanne Louise Calment, who died in 1997 aged 112 years old is recognized by Guinness World Records as the world's longest living human being, while Japanese man Jiroemon Kimura was officially recognized as 116 years old when he died in 2013.

He said his father's claim has never been recognized by Guinness as the family had never sought to contact them.
RELATED TOPICS