One-fifth of African elephants fell victim to ivory poaching in past decade: IUCN 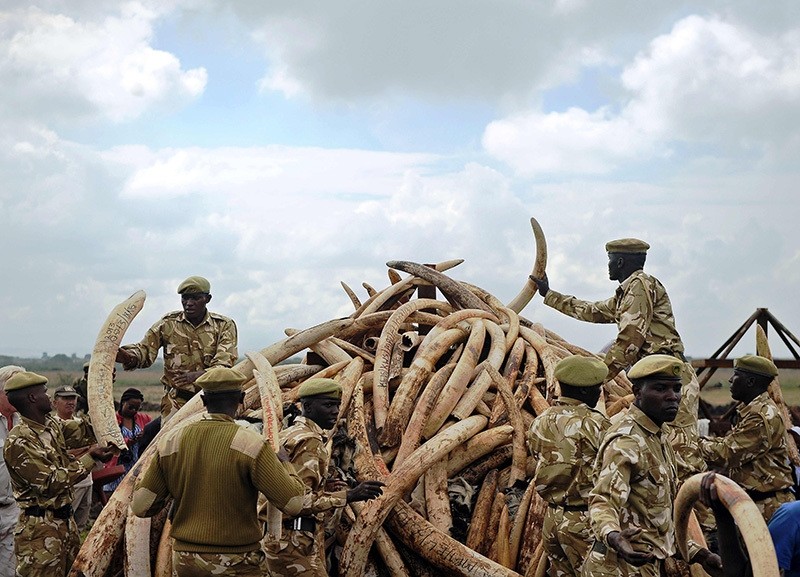 Kenya Wildlife Services (KWS) rangers piling up elephant ivory onto a pyre at Nairobi's national park in preparation for a historic burning of tonnes of ivory, rhino-horn and other confiscated wildlife trophies, on April 20, 2016. (AFP Photo)
by Compiled from Wire Services
Sep 25, 2016 12:00 am

The number of African elephants in their home continent has dropped by more than a fifth in the past decade due to a surge in ivory poaching, the International Union for Conservation of Nature (IUCN) said Sunday.

There are only 415,000 elephants left in Africa, compared to 526,000 in 2006, the organization said on the second day of a Convention on Illegal Trade in Endangered Species of Wild Flora and Fauna (CITES) in the South African city of Johannesburg.

The decline in the elephant population is the most serious in 25 years, according to IUCN.

"Poachers have killed off some entire elephant populations in West Africa and could wipe out the remaining forest elephants unless Central African countries act now to arrest the poachers, prosecute the trafficking kingpins and tackle the corruption that allows wildlife crime to thrive," said World Wide Fund for Nature elephant program leader Lamine Sebogo.

The illegal ivory trade "has remained fairly constant at unacceptably high levels" since 2010, and a "continuing upward trend" in the seizure of shipments of more than 100 kilograms (220 pounds) in 2015 indicates the key role of organized crime in poaching, according to a document released by CITES organizers on Saturday.

The plight of elephants dominated the discussion on the first day of the 12-day Convention on International Trade in Endangered Species of Wild Fauna and Flora, or CITES, conference. Rhinos, sharks, pangolins, helmeted hornbills and other threatened species are also on the agenda at the meeting, which regulates trade in wild animals and plants with the aim of ensuring their survival.

Last held in Bangkok in 2013, this year's CITES conference ends Oct. 5. The U.N. group has 183 member countries and can recommend suspending trade in wildlife with countries that don't enforce its guidelines.

Wildlife trafficking is estimated to generate billions of dollars a year globally. Interpol is among the delegations at the conference and will discuss crime, corruption and the illegal financial flows of poaching.

Many delegates at the conference in Johannesburg are likely to push to tighten the international ban on the ivory trade, as well as close domestic ivory markets. Namibia, Zimbabwe and South Africa, however, favor the sale of their ivory stockpiles, saying the money can be funneled back into conservation operations.

The world's main ivory consumer, China, has said it plans to close its domestic ivory market. The United States has announced a near-total ban on the domestic sale of African elephant ivory.

Ivory has been used for centuries to make carvings, jewelry, furniture, piano keys and other items. Many conservationists say criminal syndicates launder illegal supplies through legal markets that permit the sale of antique ivory pieces or ivory exempted from a 1989 international trade ban.

The number of Africa's savannah elephants dropped by about 30 percent from 2007 to 2014, to 352,000, because of poaching, according to a recent study. Elephant populations in Tanzania and Mozambique were among the hardest hit.

Tom Milliken, a co-author of the document released at the CITES meeting, said there are about 50 ivory seizures of more than half a ton, and sometimes as many as four tons, every year. Such big shipments indicate the involvement of organized criminal groups, said Milliken, an expert with the TRAFFIC conservation organization.

"Nobody is really uncovering their identities and making arrests and prosecuting the people who are really behind this," he said, adding that poaching syndicates view occasional ivory seizures as a form of "taxation" on their lucrative activity.

Some governments have the capacity to target ivory syndicates in the same way they prosecute drug kingpins, but are sometimes "more comfortable" going after low-level operatives rather than well-connected ringleaders, said Susan Lieberman of the Wildlife Conservation Society, a New York-based group.