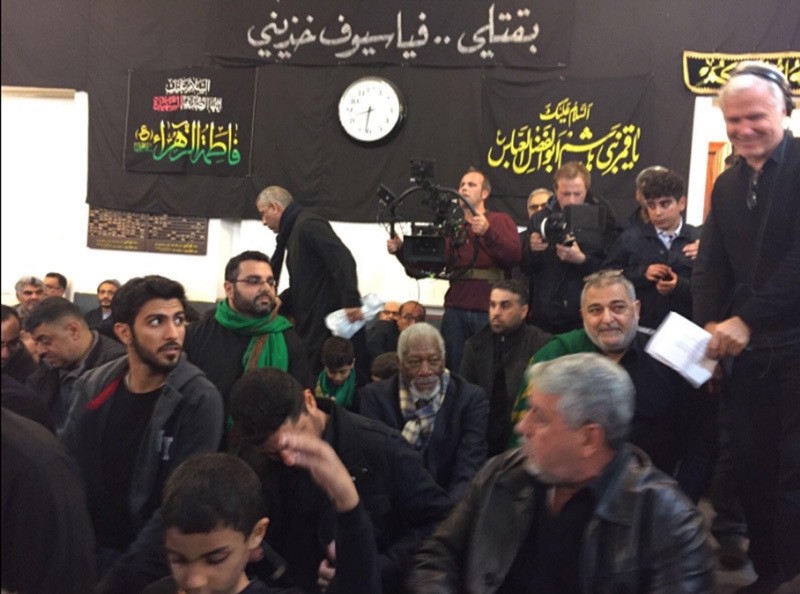 Hollywood star Morgan Freeman has shocked Londoners on Tuesday by attending a Shiite religious ceremony in the British capital.

Photos taken of film star Freeman emerged on Twitter while he was sitting cross-legged on the floor of the ceremony hall of Shiite Muslims.

The ceremony was held by the London-based Al-Khoei Foundation to mark Ashura Day, the holy day of Shiite Muslims.

Freeman attended the ceremony as part of his documentary series "The story of God with Morgan Freeman" which premiered last April and claims to explore different cultures and religions to uncover the meaning of life.

Yousif Al-Khoei, the executive director of Al-Khoei Foundation, released the photos of the Hollywood star on his Twitter account.

Ashura is the 10th day of Muharrem, the first month of the Islamic calendar, which is widely celebrated in Muslim countries with consecutive events.

The word "ashura" means "10," referring to the date of the day. For Shiite Muslims, the Ashura Day is a major occasion, commemorating the martyrdom of Prophet Muhammad's grandson, Hussein ibn Ali and his companions in Karbala, located in modern-day Iraq. They observe morning prayers and rituals representing the martyrdom while reenactments and plays are performed to keep his memory alive.

Sunni Muslims also revere Ashura Day out of respect for the Prophet Moses, who was saved from the Egyptians by God. The day also has significance for Jews and Christians. Some Sunnis observe fasting on this day, though it is not compulsory.

The day also marks when Noah is believed to have left the ark after the floods. According to legend, Noah made Ashure dessert on the ark by mixing together whatever ingredients he had left on the vessel.