Argentine woman with Down syndrome becomes first to work as teacher 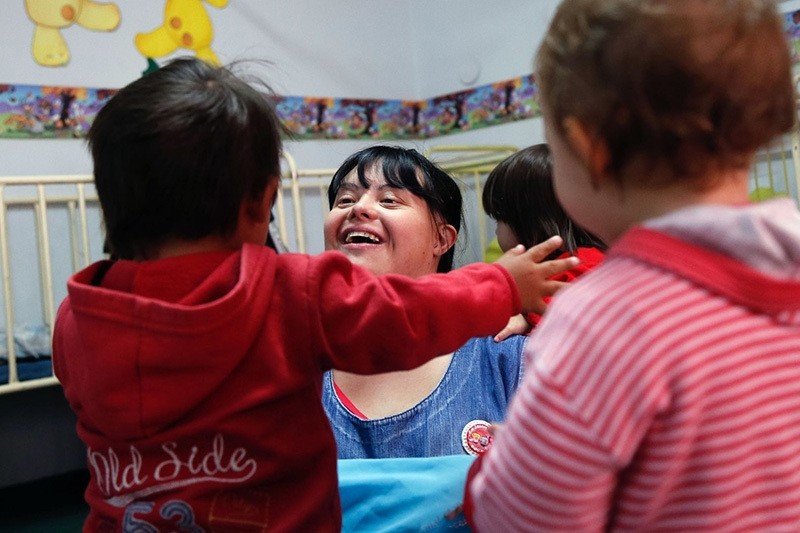 When Noelia Garella was a child, a nursery school rejected her as a "monster." Now 31, she is in a class of her own.

In the face of prejudice, she is the first person with Down syndrome to work as a preschool teacher in Argentina -- and one of the few in the world.

Garella's case set a precedent after the school confronted a taboo: could a person with a cognitive syndrome be in charge of a class?

Her two- and three-year-old pupils crowd around her affectionately in her classroom in the Jermonito nursery.

At her bidding, they sit down for a story and watch engrossed as she reads, following her lead as she imitates a shark, baring her teeth.

"I adore this. Ever since I was little, I have always wanted to be a teacher, because I like children so much," she tells AFP.

"I want them to read and listen, because in society people have to listen to one another."

Garella's determination inspired her colleagues to hire her at the preschool in the northern city of Cordoba, despite reservations in some quarters.

One party "in a position of responsibility" judged that she should not take classes because of her condition, said Alejandra Senestrari, the former director of the school who hired Garella.

Teachers, parents and even the city's mayor weighed in. They decided there was no reason Garella could not teach early-learning reading classes.

"With time, even those who had been opposed joined in the initiative to hire Noe as a teacher," said Senestrari.

"We very quickly realized that she had a strong vocation. She gave what the children in the nursery classes most appreciate, which is love."

A genetic condition, Down syndrome typically affects a person's physical and intellectual growth.

In Garella's case, it has done nothing to diminish her optimism and self-belief.

Standing by her side, her mother, Mercedes Cabrera, looks tearful when her daughter tells the story of the day care center director who told Garella's parents: "No monsters here."

But Garella smiles. "That teacher is like a story that I read to the children," she says.

"She is a sad monster, who knows nothing and gets things wrong. I am the happy monster."

Other countries have stories of people with Down syndrome who have become teachers.

But Garella's case is thought to be the first in Latin America, where disagreement over whether pupils, let alone teachers, with Down syndrome should be accepted in public schools has generated controversy in the past.

Garella's colleagues have been moved by her case.

"It has been a unique experience for the staff," says Susana Zerdan, current director of the preschool.

"The way the children accept her, incorporating her naturally into the school -- there is a lesson in life there for us all."

Garella first joined the Cordoba public education system as an assistant for reading classes in 2012.

"I always feel good with the children. Their parents love me and the other teachers and principals I have had are wonderful," she says.

She likes to do Latin dancing in her spare time. She dreams of having children of her own and lately has been feeling flutters because she has "met someone."

She has been jointly in charge, with another teacher, of a class in the Jermonito preschool since January.

"I have a boy with Down syndrome in my class. He is wonderful," she says. "Oh, it is lovely when someone like me is born."