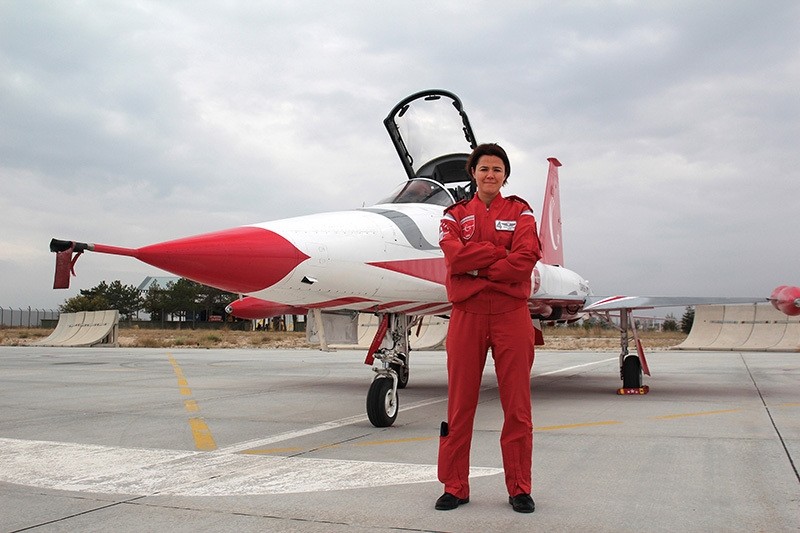 Esra u00d6zatay at an air force unit in central Konya province. She used to fly the F-5 as a fighter pilot prior to her assignment at the squadron. (IHA Photo / Ayu015fegu00fcl Ayanou011flu)
by Compiled from Wire Services Oct 26, 2016 12:00 am

Following the recent assignments in September in the Turkish Air Forces, for the first time in Turkey a female soldier was appointed as the wing commander of a jet fleet. Air pilot commander, Maj. Esra Özatay.

The pilot is married with two children and is number four on the team. As the female fleet commander of "Türk Yıldızları" (Turkish Stars), the national aerobatics team of the Turkish Air Force performing fascinating shows all around the world, Commander Özatay said the Turkish Air Forces have not lost any of its strength after the coup attempt on July 15 and continue their tasks as effectively as before. Stating that the Turkish stars show what Turkish people are capable of and represent their talents, Commander Özatay says, "We give power to those with love in their hearts for their country."

In the 3rd Main Jet Commandership Özatay has been employed in, she is the only female pilot, which was a matter of pride for her. Having graduated from the Turkish Air Force Academy in 1998, she flew with the F-5 as a fighter pilot and was appointed to the squadron in 2014. Özatay took over the command from Lieutenant Colonel Şenol Çetin at an official ceremony last month.

Özatay said, "I was very honored and it is a great responsibility for me." She continues to perform tasks that have been entrusted to the staff at the Turkish Force and Air Forces Command. As she's also a fighter pilot, she said this responsibility is assigned to those who have gained adequate responsibility and rank. "For me, being in the Turkish Stars means representing the Turkish people, the Turkish Republic. The fleet personnel here do their jobs with passion and great devotion, so being a commander in the fleet is such an honor for me," Özatay continued.

Commander Özatay says what is important to her is to perform her duties as much as possible and that there is no sex discrimination in the army, everyone does justice to what they do. "As we are all soldiers here, we try to do our best. Therefore, we are talking about something that needs talent and courage," said Özatay.

Highlighting that the air forces are still doing their jobs after the coup attempt on July 15, she adds that after these abominable events their patriotic and heroic personnel are continuing their duties. "For the Turkish Stars family, the shows we do in Turkey and abroad show our abilities as a family of what we can do and showcase our abilities. We give power to those who are patriots in their hearts," said Özatay.

The team's leader Osman Yığıcı notes that everyone says working with women does not make any difference and that everyone who does the same job is the same for them. Captain Ali Onur Adalı added that she is a member of the team and that they are facing a great deal of interest. "Until the press and local people showed this much interest, we were not aware that we flew with this many women as we already work with so many women soldiers."

First Lieutenant Resul Yıldız is a new addition to the team who is continuing his training. When he joined the team he said: "There is nothing that Turkish women are unable to do. We are happy that we are under her leadership." Captain Gökhan Esen also said, "There has never been a distinction between men and women during the wars in Turkish history," and added that there is a high number of female staff within the Turkish Armed Forces.

Touching the hearts after every show and working as a performance presenter, First Lieutenant Selim Şensoy said people can forget what you tell them but they do not forget how you make them feel. "This is what we are trying to achieve," he said.