British swimmer's Atlantic crossing in jeopardy after crew drop out 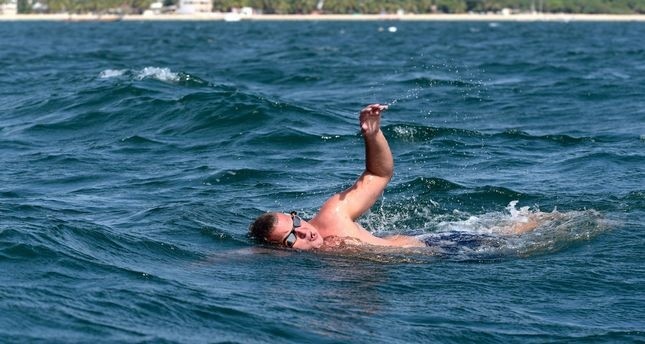 British swimmer Ben Hooper swims during a training session off the Bel Air beach, Dakar, Oct. 28, 2016. (AFP Photo)
by Nov 08, 2016 12:00 am
A British man aiming to swim across the Atlantic Ocean said on Monday he was battling to save his expedition after the captain of a support vessel and the team medic unexpectedly quit.

Ben Hooper, 38, a former military policeman, had planned to take the first strokes of his 2,000-mile (3,200-km) swim from Senegal to Brazil on Monday morning and try to make the first verified crossing.

But he failed to appear on the beach for interviews beforehand and later texted Reuters saying: "The captain and the medic have decided to leave for personal reasons.

"I'm stunned and trying to save my expedition," he added on his Facebook page later. "I cannot believe this ... so sorry ... but we will go."

Hooper has been preparing for three years and his swim was expected to take four or five months. Part of his route would be through shark breeding grounds close to Brazil.

The two support vessels, crammed with bottles of water and ration packs, were sitting idle in Dakar's marina.

The latest setback is just one in a series of challenges that the mission has faced since arriving in Dakar last month.

Four crew members of an original 10 have bailed out, including two successive captains for one of the support vessels, Hooper confirmed.

He added that replacements for the latest two dropouts had been found and the provisional relaunch date was 12 November.