The Simpsons does it again, predicting Trump presidency 16 years ago 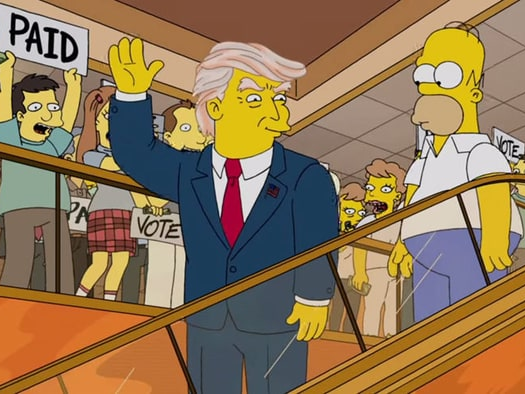 A still image from the episode 'Trumptastic Voyage shows Donald Trump and Homer Simpson.
by daily sabah Nov 09, 2016 12:00 am

The Simpsons has done it again.

The show correctly predicted that Donald Trump would become the President of the United States, way back in 2000.

The prediction was outlined in the 17th episode of the 11th season, titled 'Bart To The Future' 16 years ago and broadcast in early 2000.

The episode portrays a grown-up Lisa as Trump's successor, who quips: "We've inherited quite a budget crunch from President Trump". Sitting in the Oval office surrounded by her advisors she asks: "How bad is it Secretary van Houten?"

The iconic show, which recently aired its 600th episode, also broadcast another episode in 2015 titled 'Trumptastic Voyage', referencing Trump's real-life decision to run for the presidency. The clip featured Trump coming down an escalator with Homer Simpson, mocking Trump's announcement for candidacy with his wife Melania.

Simpsons creator Matt Groening had told British daily The Guardian earlier in the year that they had chosen Trump because he was "the most absurd placeholder joke name that [they] could think of". "It's beyond satire," he had said.

Also, writer Dan Greaney had said the episode back in 2000 had 'a dark message behind it' and was 'a warning to America" in an interview in March with The Hollywood Reporter.

"That just seemed like the logical last stop before hitting bottom. It was pitched because it was consistent with the vision of America going insane."

This was not the Simpsons' first correct prediction about future events though.

In season 6, episode 19, named 'Lisa's Wedding' in 1995 the show had forecast that future phones would have video capabilities. In the episode, Lisa and Marge chatted on phones with video screens.