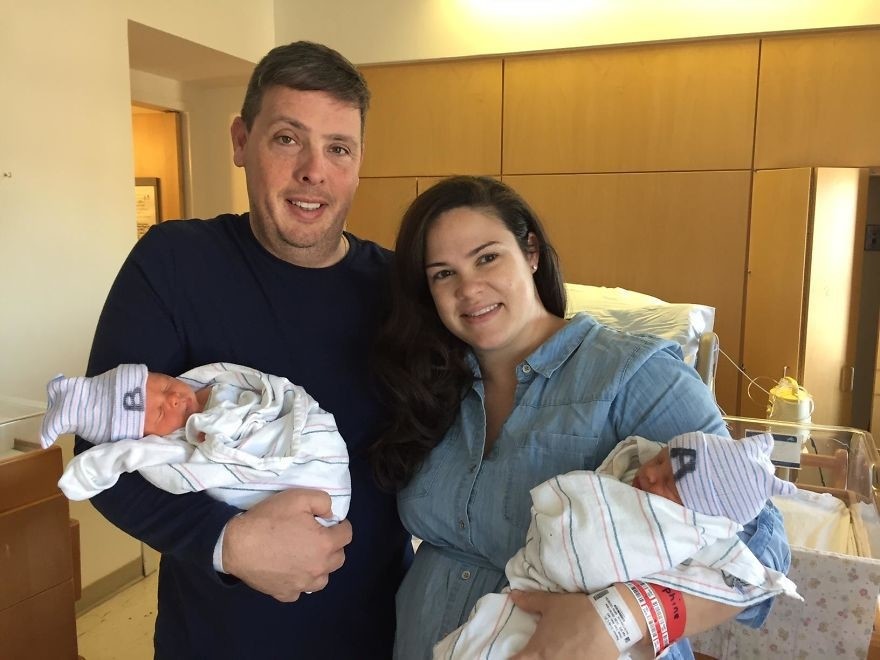 Courtesy of Cape Cod Healthcare
by Daily Sabah Nov 17, 2016 12:00 am
We are used to hearing people complain about how confusing the practice of daylight saving time could be, yet it has given birth to a delightful memory for newly-born twins, Samuel and Ronan, at Cape Cod Hospital Maternity in Massachusetts, U.S. Samuel and Ronan were born to Emily and Seth Peterson of West Barnstable on Nov. 6.

The twins' mother gave birth to Samuel at 1:39 a.m. on Sunday and brought Ronan to the world 31 minutes later. However, by then the daylight saving time for the year had already ended, making Ronan's official time of birth 1:10 a.m., which makes him 29 minutes "older" than Samuel. According to a Facebook post shared by the hospital, it was confirmed, Samuel's twin Ronan was born 31 minutes later but is now older, thanks to the change in daylight saving time.

"I said earlier that night that they were either going to be born on two different days or the time change was going to come into play," said the father, Seth, a trooper with the Massachusetts State Police. Cape Cod Hospital Maternity nurse, Deb Totten, said it was the first time she has ever seen something like this in her more than 40 years of nursing. With the daylight saving time, the clock typically moves ahead in the spring, so that evenings have more daylight and mornings have less and adjust them backward in the autumn to standard time. Daylight saving time was widely adopted during World War I to save energy, but some critics have questioned whether it really does so and is still relevant. Recently in Turkey, an amendment saw the practice come to an end.
RELATED TOPICS