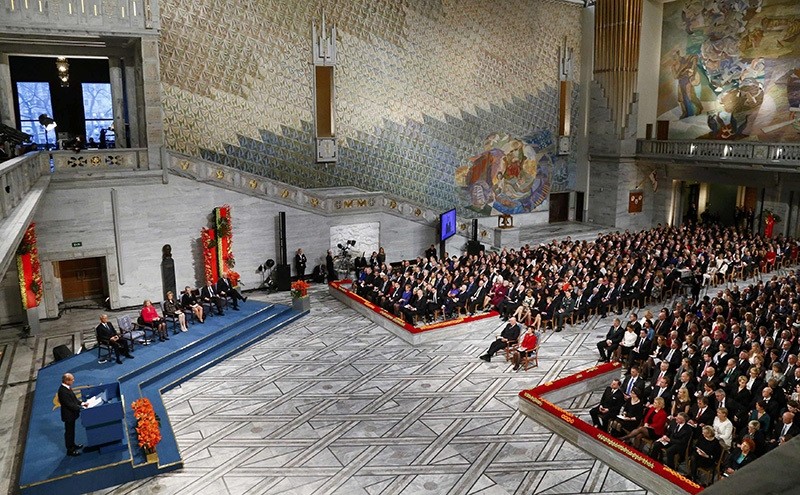 One sings of peace, the other makes peace: Bob Dylan will not travel to Stockholm on Saturday to accept his Nobel prize, but Colombian President Juan Manuel Santos will receive his award in Oslo for a deal signed with FARC rebels.

In Stockholm, where the prizes for literature, medicine, physics, chemistry and economics are traditionally awarded on December 10th, the formal ceremony will be marked by Dylan's no-show, as the first songwriter to win the literary accolade has declined due to "pre-existing" commitments.

Since being awarded the prestigious prize on October 14, the music icon has been a somewhat reluctant recipient, refusing to acknowledge it publicly for several weeks.

Amid the silence, a member of the Swedish Academy, which awards the prize, accused Dylan of being "impolite and arrogant".

The rock legend finally broke his silence in a newspaper interview two weeks later, calling it "amazing" and saying he would "absolutely" attend the December 10th ceremony, "if at all possible."

But two weeks after that, he told the Academy that he had other commitments that prevented him from attending -- though no concert is scheduled on his website.

Several other literature laureates have skipped the Nobel ceremony in the past for various reasons -- Doris Lessing on grounds of ill health, Harold Pinter because he was in hospital and Elfriede Jelinek due to social phobia -- though these cases remain "exceptional", according to the Academy.

Dylan has sent a thank-you speech to be read at the gala banquet at Stockholm's City Hall, attended by around 1,300 guests and the Swedish royal family.

And just before that, American rock star Patti Smith will sing Dylan's "A Hard Rain's A-Gonna Fall" during the prize ceremony at Stockholm's Concert Hall.

Dylan, 75, is the first singer-songwriter to win the prize, a choice that stunned literary circles which had expected a more conventional laureate.

On the same day in Oslo, the Nobel Peace Prize will be presented to Colombian President Juan Manuel Santos, the architect of a peace deal that now appears to be well on track after more than a half-century of conflict.

His government and the Marxist FARC rebels signed a peace accord on November 24 after suffering a serious setback when a first agreement was rejected by the Colombian people in an October 2 referendum.

The shock result appeared to have sent Santos' chances of winning the Nobel up in smoke.

But the Nobel committee surprised punters, reading out Santos' name as the laureate five days later.

"The fact that a majority of the voters said 'no' to the peace accord does not necessarily mean that the peace process is dead," Nobel committee chairwoman Kaci Kullmann Five said at the time.

The renegotiated peace deal, ratified by Congress instead of being put to a popular vote and including proposals from the opposition, still calls for FARC's disarmament and their transformation to a political movement.

And in the first tangible sign that peace is descending on Colombia, the rebels began destroying their weapons earlier this month.

Santos has invited some 40 people to accompany him to Oslo, most of them family members but also some of the peace negotiators, as well as a dozen representatives of the victims of the conflict, which has claimed 260,000 lives, left more than 60,000 missing and 6.9 million people displaced.

"No FARC representatives are among the guests," the head of the Nobel Institute, Olav Njolstad, told AFP.

Nor is anyone from the camp of Santos' rival, ex-president Alvaro Uribe, who opposes rebels entering Colombian politics and helped bring down the first peace deal.

After holding a press conference at the Nobel Institute on Friday, Santos will receive his prize on Saturday at a ceremony in Oslo's City Hall attended by Norway's King Harald, members of the government and celebrities.

The Nobel prizes are traditionally awarded every December 10th, the anniversary of the death of prize creator Alfred Nobel, a Swedish inventor, philanthropist and industrialist.