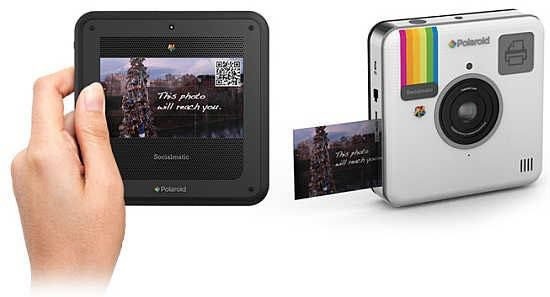 by Dec 15, 2016 12:00 am
At a photography studio in Cleveland, instructor Nicole Follen is trying to convince her students to step back in time and technology, to the age of the humble Polaroid.

She wants the students to create something they can touch and feel; perhaps even something that gasp isn't perfect.

So, she guides her class in how to transform digital photos taken on their smartphones into Polaroid-style instant photos that hark back to the bygone analog era.

"You go from something so digital to having a mark in your photography," Follen said. "You have to work for it."

Once upon a time, before digital cameras, people trying to capture moments on film only had the clunky box cameras that spit out square photos with wide white borders that you needed to shake to develop.

Now, Follen uses a printer that links to smartphones and churns out prints similar to those that were all the rage in the 1970s.

Across the United States and Europe, instant photography is making a comeback and not just in hipster enclaves like Brooklyn.

Leading the trend are those planning weddings and other special occasions. A simple internet search unearths endless do-it-yourself suggestions for asking guests to participate in creating instant memories.

"There's something about Polaroids that just feels so cozy," wrote one bride on a Reddit comment thread.

"I love the photos we have," wrote another. "A few of the pictures were kept by our guests, but we have an amazing keepsake!"

Photos snapped with instant cameras "tend to be a little more carefree and relaxed" than those taken with digital cameras, which are sometimes endlessly finessed for social media, she said.

The Impossible Project, the company that bought Polaroid's last remaining instant film plant in the Netherlands, rescuing it from extinction, is also bullish about its own future.

The company founded by Florian Kaps, an Austrian biologist-turned-entrepreneur, now makes Polaroid-style instant film, an instant camera with a modern touch (it has Bluetooth and a mobile app), and an instant film printing device, which is what Follen uses in her studio, the Cleveland Print Room.

"Florian really saw this kind of niche product that would never fade away," said Mark Appleton, head of North American sales for The Impossible Project.

Even Polaroid itself is optimistic about instant photography in the analog form, even though the company discontinued instant film production in 2008.

"We think this category will continue to grow and thrive, and then there will be more products in different formats, different size prints, different types of printing devices, whether they're printers or cameras," Scott Hardy, the CEO of Polaroid said.

A new instant camera licensed under the company name was released last January, with an updated version released in September.

Tom Lewis, who teaches photography at the Kansas City Art Institute, said he is seeing the appeal of instant photography firsthand among a younger generation who is used to digital photos that are somewhat disposable.

Students "seem to be more considered in their approach to the instant film" versus what they do with phone cameras, Lewis said.

Students are framing instant photos as works of art and using them in collages, he said, adding that some "see it in terms of something nostalgic, something they missed out on."
Last Update: Dec 15, 2016 1:42 am
RELATED TOPICS