Snake disguises itself as Christmas tree decoration in Australia 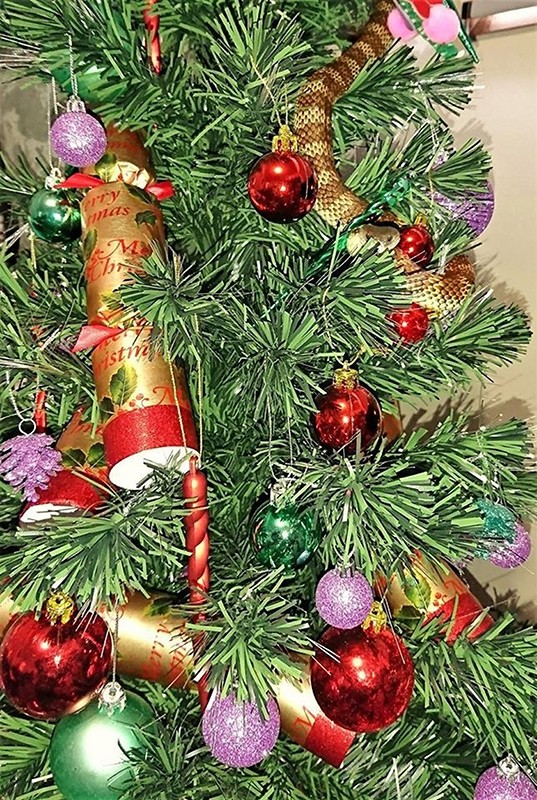 An undated handout picture made available by Snake Catcher Victoria Australia on 19 December 2016 shows a snake (top-L) hanging around a Christmas tree in a suburban home in Melbourne (EPA Photo)
by French Press Agency - AFP
Dec 19, 2016 12:00 am

It may be trying to disguise itself as tinsel, but look more closely and this is a deadly tiger snake which climbed up a Christmas tree in Australia.

A woman called Cheryl noticed the uninvited and highly venomous guest in her Melbourne home on Sunday but kept her cool -- making a cup of tea while she waited for a professional snake-catcher to arrive.

"It was a tiger snake. They are very deadly but only if you hurt them," snake-catcher Barry Goldsmith, who removed the reptile, told AFP Monday.

"It probably came in through an open door, but Cheryl was very sensible about it.

"She didn't panic, she just took a photo and sent it to the snake-catcher, me, and 20 minutes later I had the little bugger in a bag."

Australia is home to 20 of the world's 25 most venomous snakes, including the tiger snake which can grow up to 2.9 metres (10 feet) and is usually found in coastal areas.