The fight to save world's smallest rhino in Sumatra's jungles 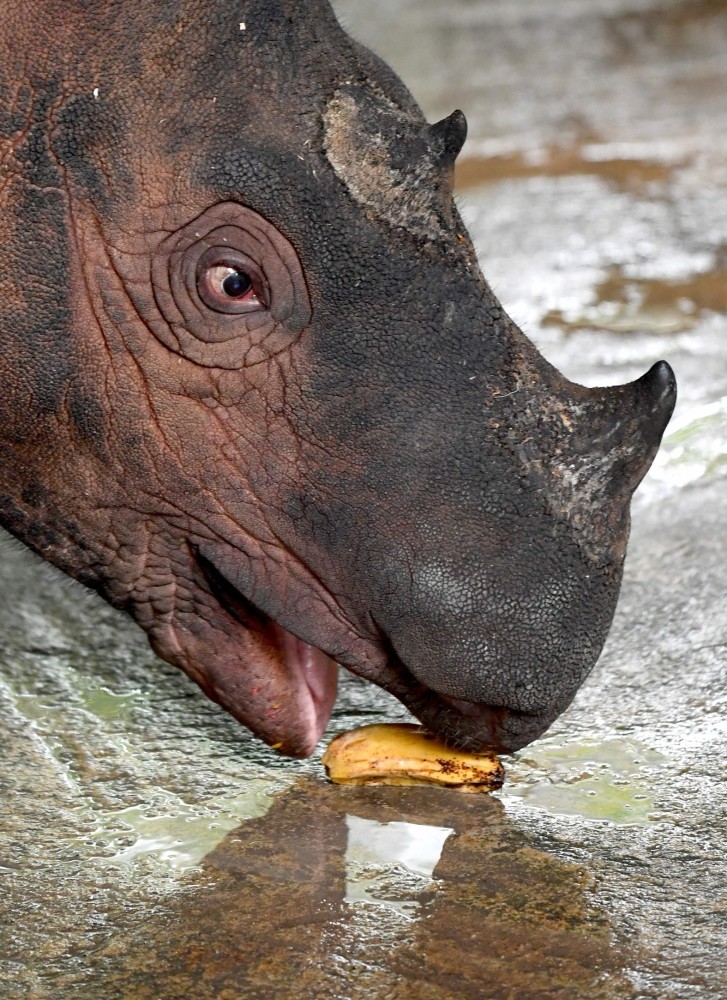 by Dec 21, 2016 12:00 am
Deep from within the Indonesian jungle, a solitary, seldom seen forest giant emerges from the undergrowth.

It is a Sumatran rhino, one of the rarest large mammals on Earth. There are no more than 100 left on the entire planet and Andatu, a four-year old male, is one of the last remaining hopes for the future of the species.

He is part of a special breeding program at Way Kambas National Park in eastern Sumatra that is trying to save this critically endangered species from disappearing forever.

The species is so rarely seen that even villagers living near the park were stunned when a wild rhino wandered into their community.

"They thought it was a mythical creature," Zulfi Arsan, head veterinary surgeon at the Sumatran Rhino Sanctuary at Way Kambas, told the AFP.

"They chased her, and so we had to rescue her."

Sumatran rhinos are the smallest of all rhinos, and the only Asian variety with two horns. Unlike their better-known cousins in Africa, Sumatran rhinos are born covered in shaggy, reddish-brown fur, earning them the nickname "hairy rhino."

Their woolly covering fades to black or disappears almost entirely over their lifetimes, which span 35 to 40 years.

This hair, coupled with their smaller stature and short horns, gives Sumatran rhinos like Andatu a gentler, softer appearance than their imposing, armor-plated cousins.

They once roamed the vast, dense forests of Sumatra, Borneo and Malaysia but land-clearing and poaching have seriously depleted their numbers.

In 2015, the species was declared extinct in the wild in Malaysia, leaving just tiny herds of two to five rhinos scattered across Sumatra and Indonesian Borneo.

In Sumatra, there are also small clusters in the west and the island's northern Leuser ecosystem, the last place on Earth where wild rhinos, orangutans, tigers and elephants roam together.

Poaching is a serious threat. The last rhino killed in Way Kambas was in 2006, Arsan said, but staffs take no chances in this section of lowland forest.

"There're still illegal activities inside the park," Arsan said. "The demand for the horn, for rhino products, is still there."

Three males, including Andatu, and four females are kept in a 100-hectare natural rainforest enclosure within Way Kambas, where vets and researchers take every opportunity to study their unusual breeding patterns.

Sumatran rhinos are notoriously difficult to breed in captivity. Females are only fertile for a small window each cycle, and need male contact to ovulate. Even then, intercourse does not guarantee conception.

To make matters worse, Sumatran rhinos are solitary by nature and often clash upon interaction.

"In one hundred years we've had just seven babies. It's very hard," Arsan said of historic efforts to breed the rhinos.

Andatu's birth in 2012 was heralded as a milestone: he was the first Sumatran rhino born in an Asian breeding facility in more than 140 years.

Since then, he has been joined by a sister, who arrived this May to much fanfare.

Andatu is close to reaching sexual maturity, and conservationists hope he can play a star role in ensuring the longevity of the species.