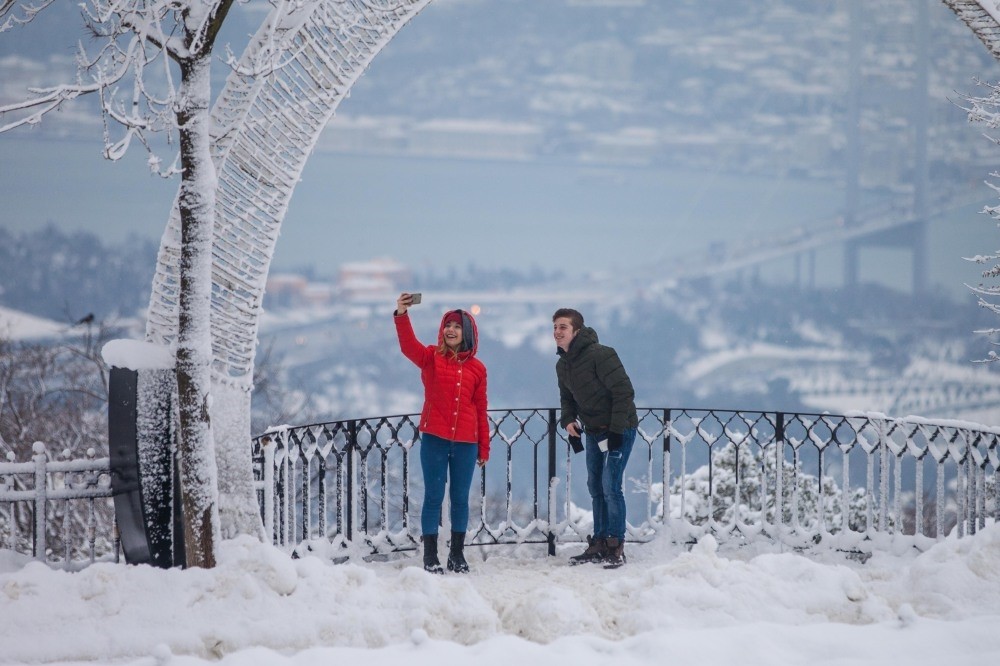 A couple taking a selfie with Bosporus view in Istanbul.
by Daily Sabah Jan 12, 2017 12:00 am
Istanbul, one of the most popular tourist destinations in the world, has beaten the likes of Barcelona, Amsterdam and Berlin to rank fifth on the 2016 list of "The Most Hashtagged Cities on Instagram." Istanbul was hashtagged around 36 million times last year.

The list was the result of a detailed annual study of the most hashtagged cities across the globe, carried out by Hashtag the World, an Amsterdam based organization that works on Instagram content.

Turks are avid followers of Instagram and even over the last couple of days, more than two million Instagram photos were shared by Turkish users with the hashtag "#kar" (snow).

In its second year, the study by Hashtag the World identified New York City as the world's number one hashtagged city in 2016 with more than 68 million posts and a growth rate of 79 percent compared to the previous year. London grabbed the second spot and was followed by Paris and Dubai respectively.

With more than 600 million active users, Instagram has had more than 40 billion photos posted to date and that list keeps growing as a whopping 95 million photos and images are added every day. It is also quickly becoming a market place as around 50 percent of brands have now started using Instagram for business.

In a press release, Hashtag the World founder Lucas Ribeiro said: "Instagram is a powerful tool for the travel industry as its 600 million users love to share their beautiful pictures about their holidays and exploring their own city. It gives great opportunities for business on Instagram."
RELATED TOPICS