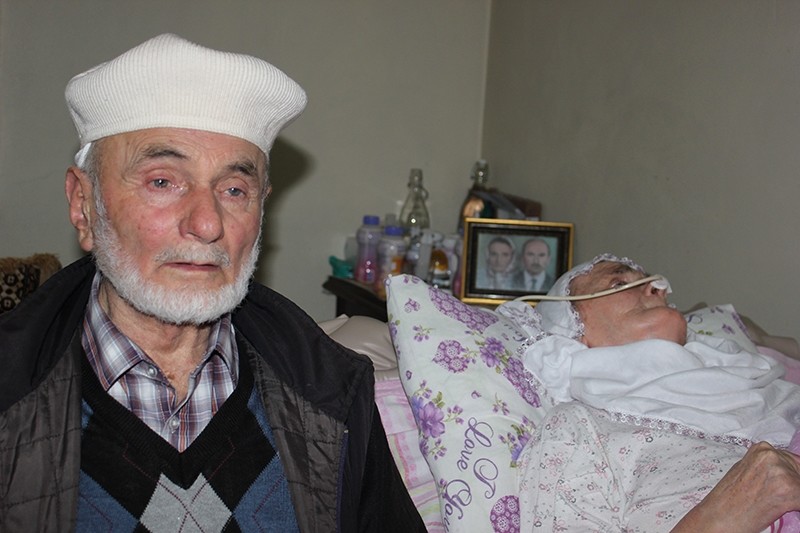 Fuat Özkan, an 84-year-old man from Trabzon, is showing the world the true meaning of "in sickness and in health," as he stays by the side of his bedridden wife.

Nine years ago, Fuat's wife of 60 years, Nazmiye, was diagnosed with Alzheimer's disease. Fuat "dede" has fiercely fought for Nazmiye's treatment and has not left her side since the diagnosis.

Nazmiye became unable to leave her bed seven years ago and ever since, Fuat has been sure to attend to all of her needs. Every morning, he wakes up early to pray and then prepares his wife's injections.

His partner of 60 years can no longer talk, so Fuat says he reads the Quran to her and they pray together.

Trying hard to hold back his tears as he talks about Nazmiye, Özkan told Anadolu Agency that he loves his wife dearly and that they had spent very happy days together.

He explained how Nazmiye had worked hard for their family, and had given him unyielding support throughout their lives together, never having separated.

Özkan stressed that he was very sad about his partner's illness, "When she fell ill, my wings were broken. At first she would go outside and not return. I was always on the lookout because she did not know her way back. Then she became very forgetful, and would fall out of bed," he said.

He added that his children come to visit often, "My children also give us a lot of support."

Fuat says he has no plans of leaving his wife's side, "We have been friends for 60 years," he said, "I never let go of her hand, and I never want to leave her side."

The couple resides in the Yazlık neighborhood of Trabzon's Maçka. Together they have 12 children and 80 grandchildren.