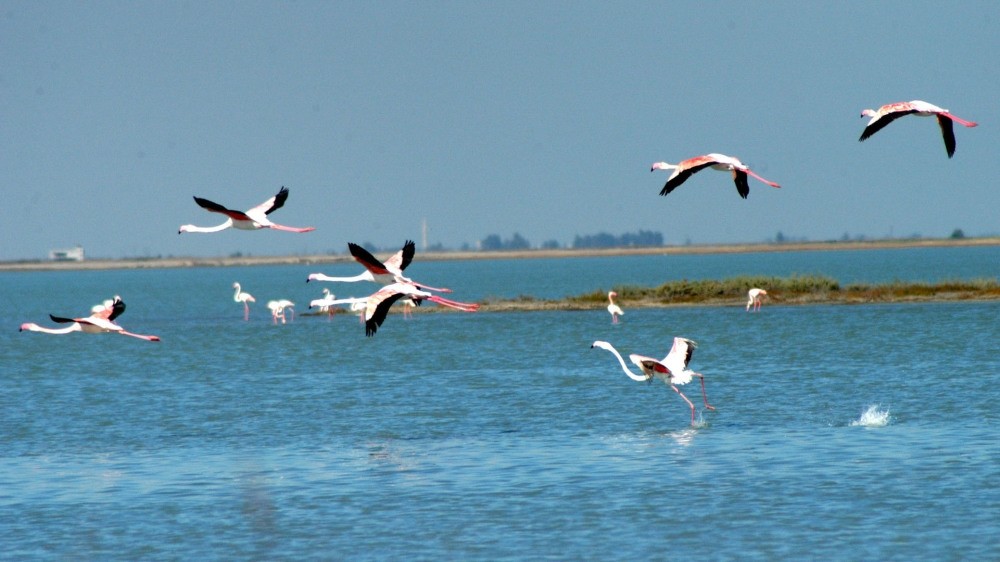 Flamingos flying over Akyatan Lagoon in Adana.
by Anadolu Agency Feb 17, 2017 12:00 am
An important wetland area on the Mediterranean, Akyatan Lagoon in the southern province of Adana, which was host to a record number of flamingos last year, will undergo a makeover for a better visitor experience.

Adana and its wetlands are one of the most significant hubs on bird migration routes in Turkey. The province also has a rich potential for lagoons and areas that can boost wildlife.

Akyatan Lagoon stands out from other wetlands in the area with its 90-decare lake area whose effects can be observed as far as a 15,000-decare area. The lagoon hosted 285,014 birds out of the 312,618 recorded birds that visited the region last year. Akyatan Lagoon is one of the most important bird fields that hosted 89,900 flamingos out of 96,232 flamingos that visited the Çukurova Delta last year. This shows that the lagoon hosted 15 percent of the flamingos living in salty and open wetlands between the south and north of the Mediterranean and the south of Asia. It is believed that there are approximately 600,000 flamingos on earth.

The provincial directorate general for nature conservation and national parks has initiated a project to open the area that hosts a great number of species for the use of visitors. The directorate is to build a walking path around the lagoon and new bird observation towers within this year. In order to provide convenience to visitors and protect the lagoon more effectively, management and visitors buildings will be constructed.

Regional director Etem Boz said the lagoon, which is recognized by the International Ramsar Convention, aims to protect the wetlands and enable their sustainable use. Boz further noted that their objective is to make children love nature with the new project. "We will make sure that this area will be a nature education center. The birds and biodiversity in the area will be introduced to students and we will manage all these projects from a single headquarter," Boz said.
RELATED TOPICS