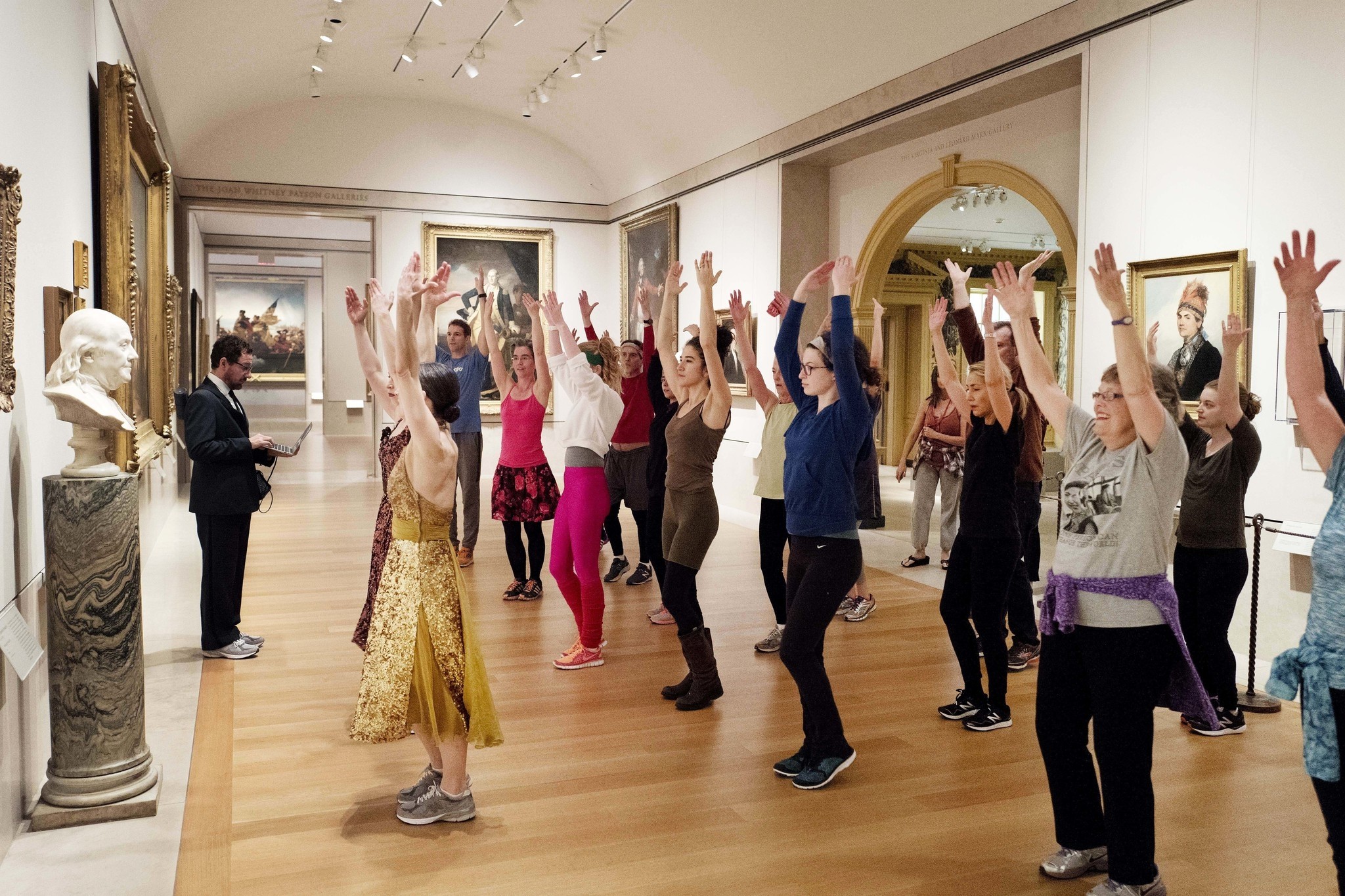 by Associated Press Feb 20, 2017 12:00 am
World-class art meets sweaty aerobics. New York City's cavernous Metropolitan Museum of Art has been holding lively morning workout sessions this winter amid its prized masterpieces. The 45-minute "Museum Workout" sends people in exercise attire chugging through 35 galleries, past paintings, sculptures, armor and other treasures, before the venerable Fifth Avenue institution opens to the public.

On a recent morning, an overnight snowstorm didn't deter any of the 15 people who'd signed up for the session. It started with a warmup: calf stretches in the museum's grand limestone entrance and an easy jog out to the Bee Gees' hit "Stayin' Alive." Then came the speedy trek through the galleries and up the preserved ornate staircase of the 19th century Chicago stock exchange.

There were squats in front of John Singer Sargent's "Portrait of Madame X," balancing on one leg before Henry VIII's rigid armor, a yoga pose before a bronze nude of the Roman hunting goddess Diana, and jumping jacks in-between, all to a soundtrack of disco and Motown hits.

Why bother traveling to a Manhattan museum — some did, from Pennsylvania, Kentucky and even California — just to exercise?

"This offers you amazing moments," said participant Oliver Ryan, who runs a New York corporate wellness company. "We did our first stretch, and there in the vast gallery was Perseus holding the head of Medusa. What hit me was this was the TV of ancient times, a frozen moment from a story everyone knew."

The Met commissioned the innovative Monica Bill Barnes Dance Company for the project. It was choreographed by the two women leading the workout — Monica Bill Barnes herself and her dance partner, Anna Bass — along with Robert Saenz de Viteri, the company's creative producing director.

Bass said the team worked "obsessively" calculating how to keep a safe distance from the artworks. That means no wild swinging of arms or legs, and exercising a minimum of 3 feet or so from any treasure.

Leading scantily clad, pumped up bodies around the artworks "really runs against the culture of being in a museum, being quiet and being still and walking slowly," said Barnes.

"We're in the business of making strange things," she added with a wry smile, "bringing dance where it doesn't belong."

De Viteri helped guide the workout session in a vintage tuxedo and sneakers, holding a laptop attached to a speaker that channeled music and recorded narration by artist and author Maira Kalman, who selected the art and gallery route.

"Something very physical happens to me when I'm in a museum. I get this rush of excitement, this kind of tingle of mad, passionate arousal," Kalman's recorded voice said as the group did side-stretches in front of a stern-looking bust of American founding father Benjamin Franklin.

The workout ends with everyone lying on their back, eyes closed, on the floor of the Met's luminous American wing. This yoga pose, called savasana, is meant to release tension from mind and body while absorbing the benefits of the dynamic exercises. Rising over the human stillness is Augustus Saint-Gaudens' ancient goddess — the resplendent, gilded Diana, about to release her arrow.

The first sessions, from Jan. 19 through Feb. 12, were sold out months ago. The interest was so intense that more were added, through March 9, and they're also sold out. Participants, both men and women, have ranged in age from 13 to 85.

Museum officials say there are no immediate plans for a future staging of what is essentially a "performance piece" that took three years to create, with each participant movement matching music and visuals moment by moment.

"The Museum Workout" was commissioned by the museum's MetLiveArts performance series and partly funded by the Jerome Robbins Foundation and One World Fund.
Last Update: Feb 20, 2017 1:01 am
RELATED TOPICS