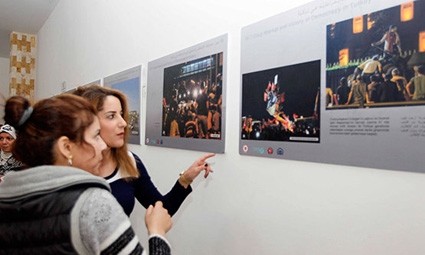 Ambassador Erciyes spoke to an AA correspondent during the opening ceremony and said: "We will continue to show people around the world how dangerous the Gülenist Terror Group (FETÖ) is. This is the fourth exhibition we are holding in Lebanon."

Erciyes also thanked AA for supporting the exhibition, noting: "July 15 marks the saga of the Turkish people. It is one of the rare modern-day examples of a nation defending its future. July 15 witnessed the power of the Turkish nation. Within this scope, this exhibition offered us the chance to remember and commemorate those who died defending democracy on the night of July 15. I want to thank AA for providing the photographs for the exhibition. We will continue to tell people that FETÖ is not only a danger to Turkey but also to the rest of the world."

Ambassador Erciyes claimed that the spirit of the July 15 was felt across Lebanon, saying that both the Turkmens and the Turkish people could not sleep on the night of July 15 and showed support to Turkey with all their hearts: "It was a hard night for all of us," said Erciyes. "We could not sleep. Of course, our Lebanese friends supported Turkey by flocking to the streets of Lebanon on the night of July 15. In fact, when it was clear that the coup attempt had failed as the sun began to rise, most Lebanese people prayed for the bright future of Turkey during their morning prayers. Since the night of the failed coup attempt, the doors of our Embassy have not closed; many representative and envoys have delivered their condolences."

In Aydamon where the exhibit is being held, Municipal Mayor Kemal Maksud indicated that Aydamon is a town heavily populated with Turkmens, saying:"It is an honor for us to hold the July 15 exhibition here in the Lebanese town of Aydamon. The victory of July 15 should stand as an example for the entire world."

Maksud claimed the Turkmens in Lebanon try to benefit from the experiences of Turkey and the Turkish people as much as they can, saying: "We also want to offer insights gained from the failed coup attempt to the locals of the Lebanon. This is the fourth July 15 photo exhibition being held in Lebanon. It is important to hold this exhibition in Aydamon where the Turkmens live, as it might set an example for them. We stand for democracy and those who are elected democratically," he added.