No ceremony for Palestinians in 'Cemeteries of Numbers' 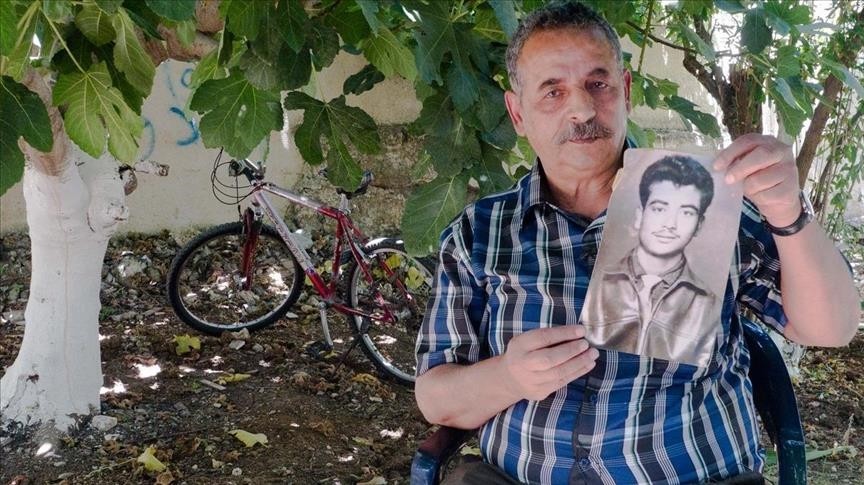 Burial ceremonies are sacred for all three Abrahamic religions. However, some Palestinian families bear the scars of not knowing where their relatives' bodies have gone while some do not even know exactly when or how they died as there are missing people, especially in jails

A simple visiting slip, scrawled in Arabic on a faded piece of Red Cross-branded stationary, would eventually become key in proving where Anis Dawleh was when he died in 1980.

The slip was issued to Dawleh's mother, allowing her the rare opportunity to visit her son in an Israeli prison, just two days before his death. It would also confirm that he died in prison and had not yet been released, as the Israeli authorities would later suggest.

Dawleh's body is one of an estimated nine that cannot be located in Israel's "Cemeteries of Numbers" - the military cemeteries in which anonymous numbers on grave-side stakes are used to identify Palestinians interred after being killed during alleged attacks on Israelis or while in detention.

In a region where the warring parties attach exceptional cultural and religious importance to burying their dead, the fact that some bodies have gone missing from these cemeteries has challenged just how far that respect extends between enemies.

"[Our] mother died in 2011 wishing she could have touched his face with her hand, that she could say farewell to him - they denied her that," Dawleh's brother Hassan, 67, told Anadolu Agency.

He proudly keeps two photos in his home: a wrinkled, greyscale portrait of Dawleh during a spell with the Jordanian army; and a shot of a uniformed Yasser Arafat, the iconic late Palestinian leader, mourning Dawleh's death in a Beirut room adorned with posters of the 36-year-old.

Dawleh's case eventually became central to a Palestinian campaign aimed at securing the return of the bodies, led by the Jerusalem Legal Aid Center (JLAC) in cooperation with Israeli group HaMoked and other human rights lawyers.

"We want the body. We want our rights from Islam, according to our manners, our traditions, our customs," Hassan said, adamant that his request was in line with the basic principles of all three Abrahamic faiths.

Neither Hassan nor his brothers or father could visit Dawleh at the time of his death, scattered as they were throughout Jordan, Lebanon and Syria as cogs in the Palestinian resistance. Only their late mother could rely on the intercession of the Red Cross to make visits every year or two.

When Hassan eventually returned from his years abroad to their family home in Qalqilya, a northern town in the occupied West Bank, he turned to the JLAC for help in retrieving his brother's body.

Requests for information bounced between the lawyers and the military, which had initially said there was no trace of him.

"They said he was released alive," Dawleh recalled, clutching the stack of weathered letters and records that proved otherwise. "How was he released before his death? So I insisted: I want to know what his fate was, what became of him."

Their mother's visiting slip and Red Cross medical records of a hunger strike that ended only five days before Dawleh's death were also supported by records from a post-mortem, which - to Hassan's surprise - was carried out two years after his brother's death.

The results were never given to the family.

The military admitted that Dawleh must have been in their custody, but they still did not know where the body was, making him one of the nine they would later claim could not be returned after all efforts had been exhausted, according to legal records from lawyers representing the families.

Several generations populate the military cemeteries - from the height of the Second Intifada in the early 2000s and recent Israeli military operations in the blockaded Gaza Strip to the organized armed resistance of the 1960s and '70s.

Most of the missing bodies belong to the earliest generation, when the hasty burials and neglected graves had not yet been exposed by court cases and internal investigations that led to the most notorious cemetery, located near the occupied Golan Heights, being closed in 2003.

Sixteen graves had to be opened there in the search for Issa Zawahreh, a deceased Palestinian citizen of Jordan, without a single match being found until years later.

Andre Rosenthal, a human rights lawyer who witnessed the search, said what he saw was appalling: mechanical diggers churning up loose pieces of bone in the shallow, crudely numbered graves, revealing bodies buried without coffins and protected only by tattered plastic bags.

The identifying numbers, written in marker-pen, had faded into illegibility.

"We had reached a depth of about 50 centimeters. The two body bags were on top of another, too close to tell which was actually plot number 245 and which was the plot next to it," he told Anadolu Agency.

Animals had eaten the missing metal tags used for identifying the bodies, a military rabbi told Rosenthal - who is one of the few to have visited the cemeteries, which are classed as closed military zones.

In court, the military had argued that bodies could have gone missing because, over time, the earth between the graves had shifted, relocating the corpses.

Rosenthal said conditions at other cemeteries had since improved, but he is still fighting two cases in which Palestinians killed in the Second Intifada had not yet been found.

The JLAC has also filed for the return of 116 bodies still in the cemeteries, but bemoans the lack of information. The state recently requested more time as it could not identify all the bodies on the list and lacked dedicated personnel to deal with the issue.
RELATED TOPICS