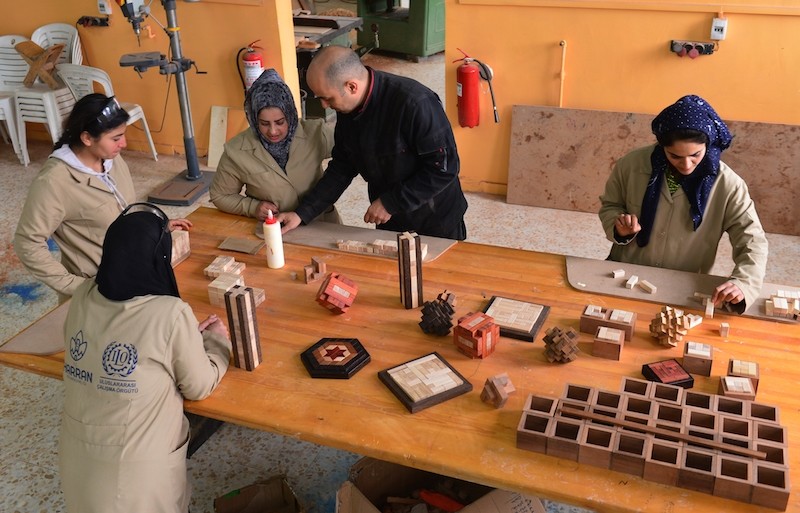 Women in u015eanlu0131urfau2019s Harran district are supporting themselves by making wooden puzzles under the mentorship of master puzzle-maker Yavuz Demirhan. (Anadolu Agency Photo)
by Daily Sabah with AA Mar 15, 2017 12:00 am

The governorate in Şanlıurfa's Harran district has selected five Turkish and 22 Syrian women to be trained in making wooden puzzles, which have garnered great interest from people of all ages, especially in Europe.

Turkish entrepreneur Yavuz Demirhan, who has been awarded every year by the International Puzzle Federation, is training some of the women in the workshop to make the puzzles that will be marketed to the world.

The women are involved in every step of the process, from the design to the production of different types of jigsaw puzzles, and the work allows them to contribute to their family incomes.

Harran District Governor, Temel Ayca told Anadolu Agency that they had decided to produce puzzles in order to increase the product range of the workshop.

Stating that puzzles contribute significantly to the sense of intelligence in both children and adults, Ayca stated that they hoped to reach serious production capacity as soon as possible.

"Our first goal is not just making money, it's a process. When we reach the desired quality of production, the commercial size of the business will follow," Ayca said.

Master puzzle-maker Demirhan said that he hopes to expand puzzle love and production in Turkey. He explained that he had come to the village with the aim of working with women who had experience with wood products, but he was surprised by the intense interest and curiosity of the women.

"The real expectation is that the women will make money from this business," Demirhan explained, "So they called me, and our aim is to market these products so that we can produce and sell them."

"These products are already very rare in the market, the more we produce, the more we can distribute. For example, the puzzles are also sent to schools to benefit children, so we profit from every aspect of this work," Demirhan added.

Workshop coordinator Hüseyin Aksu explained that the women began their training about a year ago in order to make money for their households, and underlined the fact that they had been very successful in a short amount of time.

Expressing his thanks to the district governor for supporting to project, Aksu added that the puzzle making was healing to many of the women involved.

"At the same time, our workshop has become a rehabilitation center. Employing women who have come from war-torn areas has made us love this work a little more."