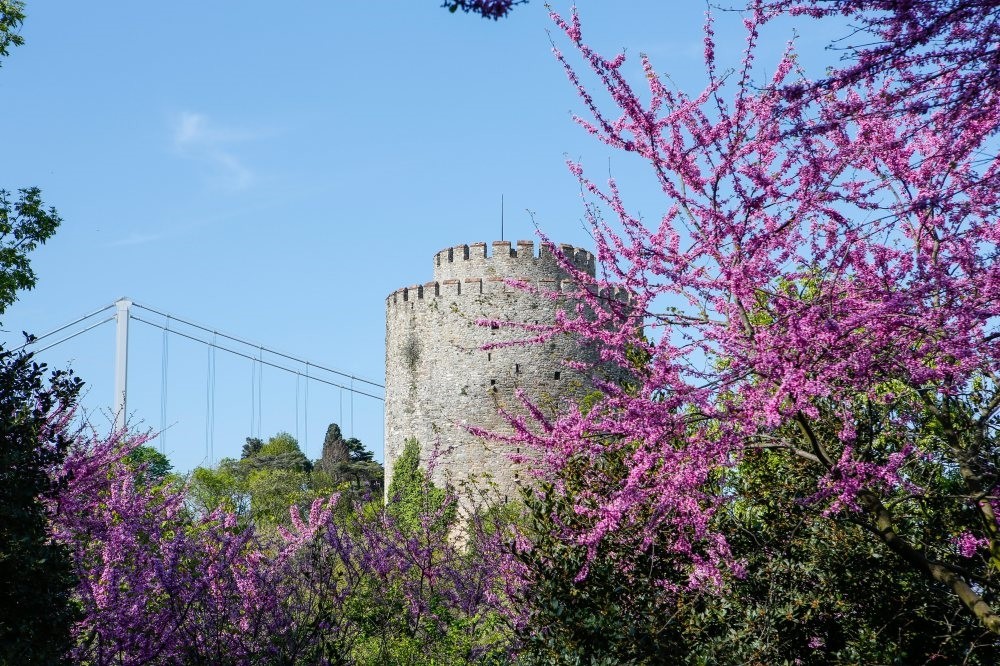 While Istanbul is famous for tulips, a flower that blooms in spring, the ancient city is also known for the Judas tree, which feeds the soul of this timeless city

With the arrival of spring, wisteria and Judas trees are coming alive on both sides of the Bosporus, enlivening the city. The Judas tree is a delicate species found in high forests often far removed from human access, and is believed to have originated in southern Europe and western Asia. While it is mostly seen in the Aegean and Marmara regions of Turkey, the trees that grow in mild climates are even more breathtaking growing along the Bosporus. 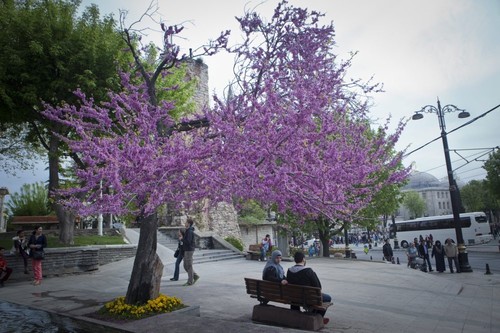 The Judas tree symbolizes not only the Ottoman Empire but also the ancient Byzantines, as it was known as the flower of Byzantium and other earlier civilizations. You can see them coloring ancient frescoes or decorating the walls of the Haghia Sophia. This tree can also be found growing along the ancient city walls of Istanbul, and there are several legends that indicate that the Judas tree is indigenous to Istanbul. For example, it is said that Istanbul, a city continuously occupied for almost two thousand years, was founded during the season of the flowering Judas tree. Another ancient legend tells us that the purple color of the Judas tree symbolized the Byzantine Empire. This color is said to have adorned the cloaks of Byzantine emperors as a symbol of wealth and power, produced from an expensive dye extracted from a kind of sea snail. The leading figures of Byzantium who sought to emphasize their status and nobility used to say that even their blood was shed in the color of the Judas tree. In the era preceding the ancient Byzantines, the seafarers who came to this location used to boil and drink the leaves of the Judas tree for their healing properties. 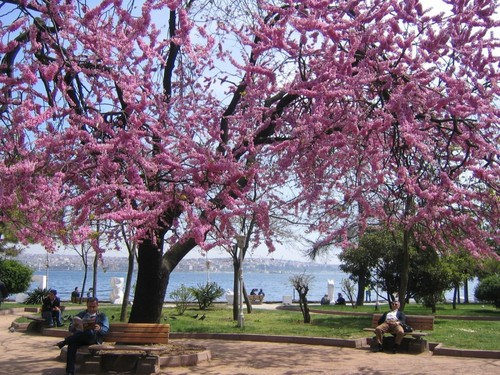 This unique tree held an elevated position in Ottoman culture, and between the 14th and 19th centuries, festivities were organized in its honor. It became an inspiration for associations, fasıl music performances and suites in Ottoman classical music and festivals. Establishments such as the "Association of the Judas Tree," the "Fasıl of the Judas Tree" and the "Judas Tree Festival" all existed during the Ottoman period. When the number of trees began to decrease, the Ottoman authorities ordered that they be planted on both sides of the Bosporus by a decree of the sultan. While the strong branches of the Judas tree were used as walking-sticks, the flowers of the tree with their unique color resulting from the mixture of purple, lilac and pink, were used to add color and flavor to Ottoman cuisine.

They are the flowers together with tulips, mimosas, daisies and orchids, which beautify Istanbul. However, now it is the turn of the Judas trees to add their riot of colors to the city. Every year in the month of May, Judas trees change the face of Istanbul and Istanbulites celebrate their blossoming. The Istanbul Metropolitan Municipality (IBB) is working to keep the soul of the Judas tree alive by hosting several events throughout the city that will continue until May 26. Istanbulites can enjoy looking at the Judas trees on special Bosporus tours accompanied by lively conversations, poetry and musical recitals. They will have a chance to observe the trees closely during tours organized within the context of the Istanbul Judas Tree Festival. The tours will be organized twice daily and will be free of charge.

In addition to these events, you can also explore Judas trees around Istanbul on your own. According to Judas trees lovers, there are six specific points for the best view of Judas trees in Istanbul, including: the Üsküdar Fethi Pasha grove; the Çubuklu hills at Beykoz; the backs of Vaniköy and Kandilli; the Aşiyan ramp; Pierre Loti, and the Mihrabat groves. You should know that one of the oldest Judas trees in Istanbul is located in the Validebağ grove in the district of Bağlarbaşı. To be able to see the oldest examples of Judas trees you must visit Maçka, the next-door neighborhood of the Nişantaşı district, while you must travel to Üsküdar to view the rare, white Judas trees. The 100-year-old Judas trees, located at the back of Kandilli, are elusive goals for those devoted to photography. In addition to its beauty, the Judas tree is also a somewhat fastidious tree, sensitive to the weather. There are some species of the Judas tree that take five to six years to blossom. In case of heavy winds, their lifespan can be as short as 15 days. Finally, the Judas tree is the forerunner of spring and the symbol of rebirth. Remember that you only have a short time to enjoy spring and the Judas tree, so hurry. It is time to re-explore Istanbul and enjoy its vibrant spectrum of colors.