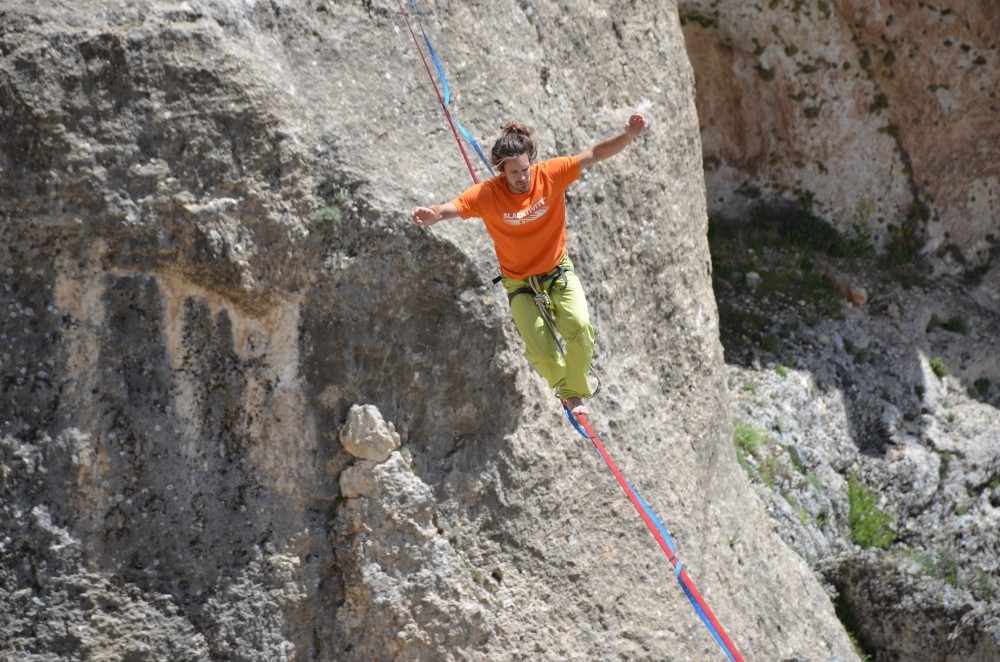 During the Levent International Outdoor Sports Festival, Swiss slackline athlete Samuel Volery walked 1,210 meters (3,970 feet) on a slackline over Levent Valley at a height of 240 meters to break the world record.

After being invited to the festival by the Slackline Turkey Team, 33-year-old Volery broke the world record for the longest slackline walk.

While it took three days for the Slackline Turkey and Slacktivity teams to set up the line across the valley, Volery broke the world record on his first try by walking 1,210 meters.

Volery said he attempted to break the world record last year in Morocco but was unsuccessful because of bad weather conditions.

"We couldn't break the record there. We came to Levent Valley and set up the longest line we could. We broke the world record on my first try. This is a huge success for us. The team was perfect, so was the result," he said.

Explaining how strong winds can affect his performance, the Swiss athlete said, "Our target was 1,200 or 1,300 meters, and I walked 1,210 meters here. We reached our goal in a way. There were times when I was about to fall. I would have walked on a longer slackline if the weather conditions had been better. That is the difficult side of this sport, because we can never find the perfect weather."

Volery stated that the valley is suitable for several sports and that he wants to come again. He went on to thank Malatya's Akçadağ Municipality Extreme Climbing and Outdoor Sports Club, İnönü University and the Slackline Turkey Team for organizing the festival.

Nuri Kayserilioğlu, a member of the Slackline Turkey Team, stated that they will perform on four different slacklines in the festival and added that they will also offer training on safe land lines for those who want to try slackline for the first time.