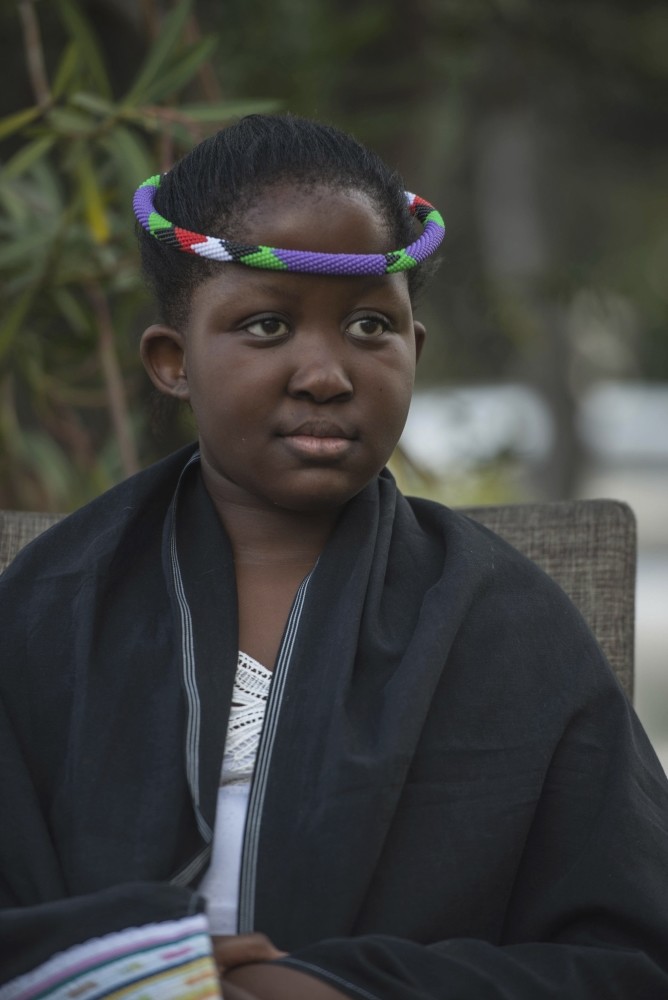 She is a 12-year-old schoolgirl who aspires to become a doctor. But Masalanabo Modjadji is no ordinary pre-teen - she is South Africa's only female traditional ruler, with claims of mystical rainmaking powers.

Queen Modjadji is the hereditary ruler of the Balobedu, an ethnic tribe in South Africa's northern province of Limpopo.

She will be formally crowned when she turns 18, having ascended to the throne as a three-month-old infant when her mother, the previous queen, died in 2005.

Until her coronation, Masalanabo is not making any public statements.

But AFP gained rare access, meeting her in a suburb outside Johannesburg where she lives during term time with her guardian Mathole Motshekga, who speaks on her behalf.

Masalanabo arrived back from school driven in an ordinary sedan car, and quickly swapped her black uniform tracksuit for a black-and-white traditional robe and a multi-coloured beaded headband.

She sat quietly next to her guardian, listening carefully and smiling.

"She knows that this is her position by birth, so she doesn't have to hurry," said Motshekga, describing her as the "earthly representative of the rain goddess."

Masalanabo will sit on the dynasty's throne in her ancestral village of Modjadjiskloof in the fertile valley of Molototsi, 400 kilometres (250 miles) north of Johannesburg.

The monarchy, which originated in what is today southeastern Zimbabwe, has been ruled by women for over 200 years.

Her mother was the first queen able to read and write. She could speak English, was computer literate and drove a car.

Last year - after a long campaign, and a succession dispute - the Balobedu queen was officially recognised under South African law for the first time since apartheid.

It means the royal family will qualify - when the queen turns 18 - for government money under the 1996 constitution that was designed to involve tribal rulers in the newly democratic South Africa.

"For the first time in the history of South Africa, we have a legally accepted queenship," said Motshekga, who is also an ANC lawmaker and from the Balobedu tribe.

He said Masalanabo - who has met President Jacob Zuma - has friends and is on social media, but that she is also preparing for how to balance her regal duties with the realities of everyday life.

When not at school or playing with her friends, she spends time with Motshekga's wife Angie Motshekga, who is the country's basic education minister and is Masalanabo's custodian mother.

"They discuss everything from politics to traditions," he said.

During school holidays, Masalanabo, who has an older brother studying at university, heads to the royal palace at Modjadjiskloof, where she undergoes early initiation teaching.

The ceremonies - which are restricted to the members of the royal family, with the queen leading the rain prayers - are held at five different shrines over five weekends.

On the final day, if all goes to plan, the first rains of the season fall -- welcome news in South Africa, which has suffered a series of recent severe droughts.

The ritual involves a specially-chosen cow, drinking traditional beer, and singing and dancing in the palace courtyard where shoes are strictly forbidden.

"The animal (cow) will come and drink the special brew," explained John Malatji, head of the Modjadji Royal Council, sitting in the middle of a circular palace courtyard.

The remaining beer is then shared among family members - young and old - before prayers are said, calling for rain.

"Finally we spend the night dancing to special divine songs," he said.

At another shrine, Phiphidi Falls, the rites are conducted on a treacherously slippery slope where devotees risk slipping and falling into the water below.

"It is very important to come here every year. The rituals are a way of thanking the ancestors and asking for things that we want for the coming year," said researcher Fathuwani Mulovedzi.

'Both male and female'

Traditional rulers do not have any formal power in South Africa, but they still wield influence - and the government money is highly sought after.

The rain queen is seen by her community as "a sacred person," said Wits University cultural anthropologist David Copland.

Her relevance in modern society is representing "a spiritual sense of identity and special powers [just as] people think the Pope has powers," he said.

The queen's family life will also be distinctive.

After she is crowned, she will marry several maiden women, paying their families "lobolo" money - which is normally paid by a husband to his new wife's family.

The wives then have children with other royal relatives, and the children are counted as the queen's own. She, too, can have children, but only with a relative whose identity remains secret.

"The queen is both male and female. That's how she expands her family," said Motshekga.

South Africa legalised same-sex marriage in 2006, but for the Balobedu queen it was nothing new.

"We have been doing that for hundreds of years. It's our way," said Malatji.