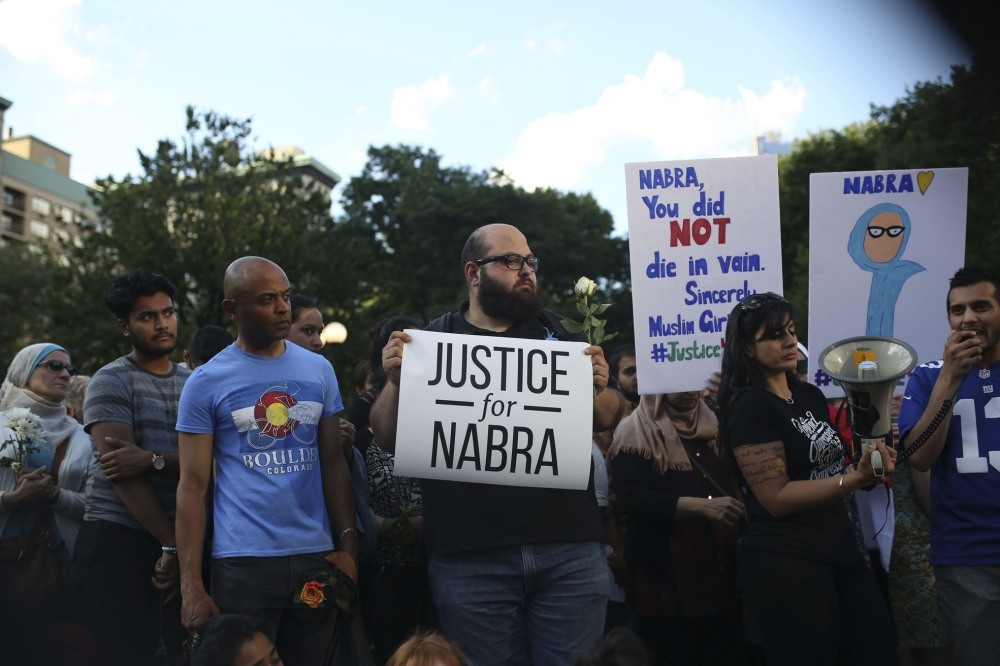 People came together after the murder, rising against Islamophobia.
by Anadolu Agency Jun 22, 2017 12:00 am

Mohmoud Hassenen Aboras has not explained to his youngest daughter why her oldest sister has not been home since the early morning hours of last Sunday. At the age of three, she is too young to grasp the tragedy that befell their family.

"Where is Nabra?" she keeps asking, Mohmoud said during an emotional interview.

Nabra, Mohmoud's eldest child, was with a group of more than a dozen teens as they returned to a northern Virginia mosque following a Ramadan pre-fast meal at a nearby fast-food restaurant.

An altercation broke out between one of the teens and Darwin Martinez Torres as police have identified. As the dispute escalated, Martinez Torres, 22, drove up on to the curb, forcing the group of teens to scatter.

He then got out of his car with a bat. What happened next is the stuff of nightmares.

Nabra, 17, was allegedly assaulted with the bat, thrown into the vehicle and taken to a second location where she was assaulted again before being thrown in a pond. Her body would be discovered there by police the following afternoon.

It is unclear what drove Martinez Torres to allegedly commit the grisly, senseless murder but police have said they have not come across any evidence to support hate crime charges beyond the murder charge he is facing.

However, for Nabra's father there is no doubt his daughter was "killed because she's a Muslim." Mohmoud pointed to the fact that Nasra, like many girls in the group, was wearing Islamic clothing, including a hijab, when the attack occurred.

"She was innocent," he said.

While he disagrees with the assessment of law enforcement regarding hate crime charges, Mohmoud is grateful to the Fairfax Police Department for their work on the case.

"These people do a good job," he said.

Still, he says that while he loves the U.S., where he is a citizen, he worries about the state of Islamophobia in the country.

"We keep hating each other for religion, color or like that," he said. "It's not good. Why you don't love each other? Forget the religion. We are human beings. Why don't you love each other?"

As he reflected on his daughter's short life, Mohmoud returns to one phrase repeatedly, "She had hospitality."

That trait was part of their culture, said Mohmoud, who is a Nubian from southern Egypt.

Nabra grew up among America's patchwork of faiths, ethnicities and races, something that was seen among the friends she brought to her family's home.

Christians, Hindus, Hispanics were among her friends she brought to the home she shared with three siblings.

"She loved everybody," her father said, taking pride in the fact that he teaches, and will continue to teach, his children to love others regardless of their background. "We cannot forget her at all. We're going to remember her all my life. I cannot forget her. She was a very nice girl."

Through the maelstrom of emotions, one thing is clear; Mohmoud lost a child of which he is boundlessly proud.

That will not change.

She is now gone, and in the midst of that raw, visceral absence, Mohmoud said he does not want other families to experience the pain he is going through.

"I hope nothing happening to the other families, like what happened to my daughter," he said. "My daughter, she's gone. She's in God's hands. I just want people to pray for her."