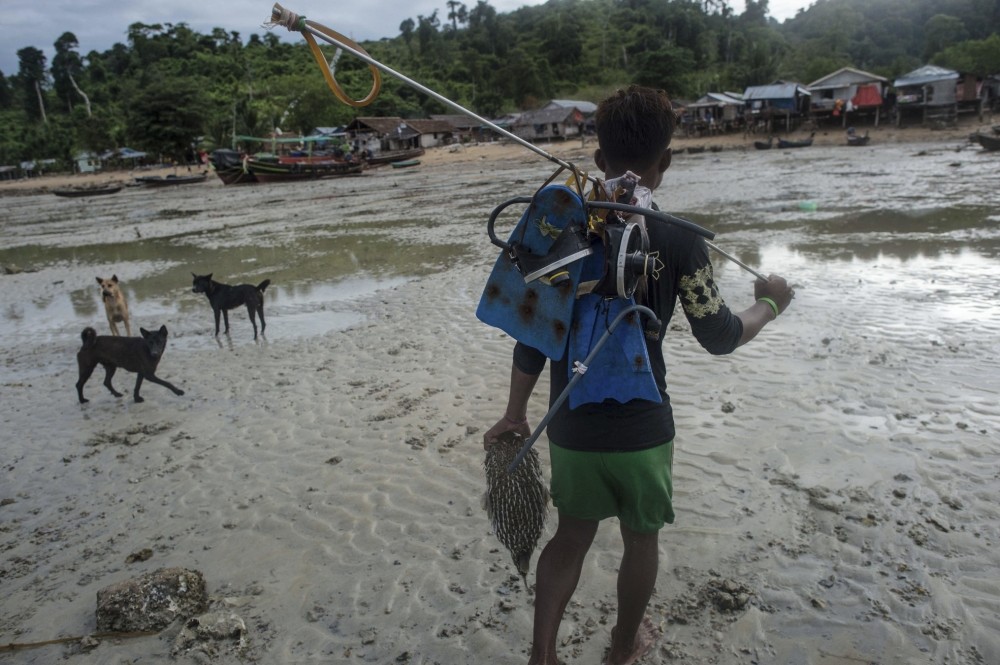 A Moken fisherman, heading home while carrying his fishing gear and a pufferfish he caught in Nyaung Wee village in the Myeik Archipelago, off the coast of southern Myanmar.
by Jul 05, 2017 12:00 am

With a swift breath the teenage boy dives into the turquoise waters of southern Myanmar, a spear clutched in his hand, but below him lies nothing but a graveyard of broken, grey coral.

He is one of the Moken, a nomadic seafaring tribe who have perfected this free dive fishing technique over hundreds of years among the 800 islands that dot the Myeik archipelago and neighboring southern Thailand.

Until recently the sea provided them with everything they needed: a base for boats they lived in, fish and seafood to eat and bounty such as pearls to trade with islanders for fuel and rice.

But the waters have been devastated by the commercial fishing industry that has eaten away the area's once abundant marine life.

The destruction has been wrought by fishing boats, many believed to be from neighboring Thailand, who use dynamite and trawlers to sweep the seabed.

In a cruel chain reaction, some Moken youths have ended up working for the fishing fleets that are destroying the ecosystem that supported them through the generations.

"When we were young, a husband could easily support his family," Kar Shar, the Moken leader in Makyone Galet village, recalled as he smoked his pipe outside his stilted, corrugated-iron house. "Now the whole family has to work to survive, and sometimes even that is not enough."

Many islanders, including local Karen and Burmese as well as the Moken, known as Salon in Myanmar or "Sea Gypsies" in the West, have been caught up in the trade.

Impoverished, stateless and with restricted working rights, some Moken began diving for fishing crews in the early 1990s and continued after the former military government forced many to live on the islands.

"There is a lot of dynamite fishing," said Jacques Ivanoff, an expert at France's CNRS and the Musee de l'Homme who has spent decades working with the Moken. "Left alone... (they) have no other choice to make a living."

It's risky, illegal work. The fishermen travel to the deserted outer islands where they are less likely to be caught.

There the divers search for the best spot, before throwing in the dynamite and quickly reversing away.

Some breathe through thin plastic tubes hooked up to compressors, while others use no equipment. Many suffer decompression sickness, which can leave them crippled and unable to walk.

Others die as they swim up to the surface, or never surface at all, a terrible price to pay for a business whose profits largely slip overseas.

For many the potential profits make the dangers worth it. Divers can earn more than $100 in a night, compared to an average wage of $3 a day on the islands.

Some Moken have turned to drugs to cope with the strain of the work.

Rights activist Khin Maung Htwe estimates around 40 percent of Moken men on the islands use narcotics, either yaba or heroin from Myanmar's drug-producing borderlands.

Most are young men, leaving the Moken women to marry the local ethnic Karen and Burmese and settle further into a more land-based culture.

"Now there are not as many Moken men as women left," said Tun Aung Soe, 20, whose mother is Moken and his father ethnic Burmese.

A Norwegian fisheries research vessel which surveyed the Myeik archipelago in 1980 and again in 2013 found rampant overfishing had led to a 90 percent fall in the biomass of open ocean species of fish.

Robert Howard, marine program advisor for environmental NGO Flora & Fauna International, said there are an estimated 8,000 smaller boats and many other large trawlers operating in the area.

"If that keeps going the fishery will eventually collapse," he warned.