Mother of Srebrenica victim to bury son after 22 years 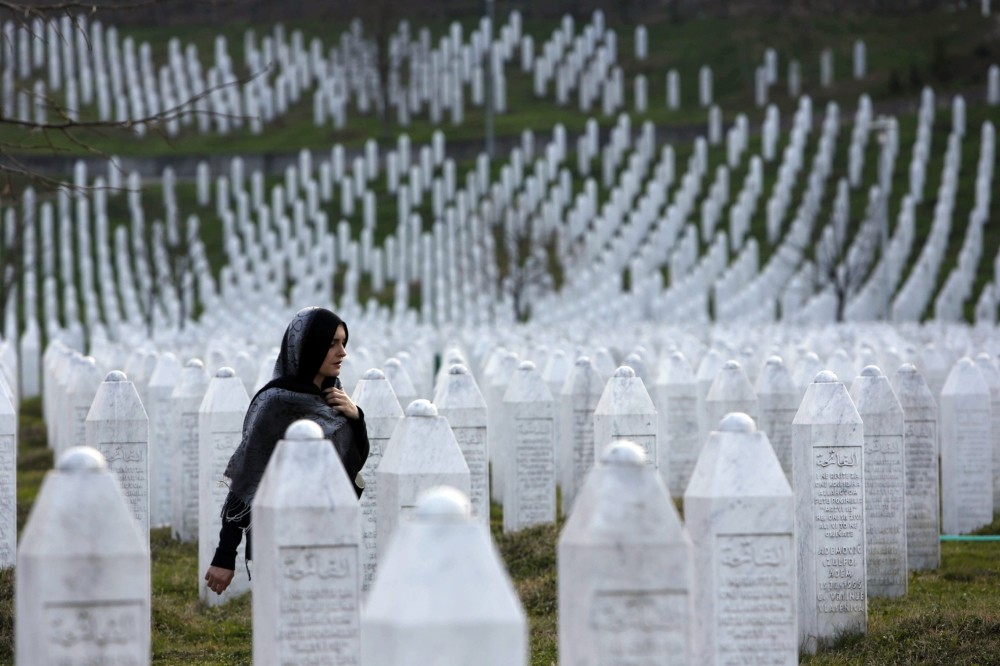 A Bosnian woman walks among gravestones at Memorial Centre Potocari near Srebrenica.
by Anadolu Agency Jul 11, 2017 12:00 am

Most teenagers in Europe go to school, socialize with friends and plan for their future throughout their adolescence. For Bosnian Damir Suljic, this youthful life was cut short at 15 in 1995 when he was forced to take a final journey with his father from which he would never return.

The six-member Suljic family was living in the Bosnian village of Pusmulici near Srebrenica until they had to flee approaching Bosnian Serb forces on July 10, 1995.

Caught up in the 1992-1995 Bosnian War, they like thousands of other Bosnian Muslims wanted to reach Tuzla - a safe territory held by Bosnian government forces about 100 from Srebrenica.

However, this hope was just a prelude to the Srebrenica genocide, Europe's worst massacre since World War II.

The family was torn apart when Damir and his father Kemal decided to separate and flee through the woods to the safe zone in Tuzla.

Thousands of other Bosnian men and boys also took flight through the area's forests, hoping to evade Bosnian Serb paramilitaries.

It was a doomed journey for many. About 8,000 Muslim Bosnian men and boys were killed after Bosnian Serb forces attacked the Srebrenica "safe area", despite the presence of U.N. Dutch troops tasked with acting as international peacekeepers.

Thousands of bodies were buried in mass graves or left in remote woods.

In July 2014, a Dutch court ordered the Netherlands to compensate the families of the more than 300 Srebrenica victims, saying the peacekeepers should have known they would be killed.

This week Damir's mother Hanija Suljic told Anadolu Agency (AA): "Damir told his father: 'Who knows what will happen to me.' He was crying, and then said: 'Do not leave my life in their [Bosnian Serb forces] hands.' "

It is a sentence she says she will never forget.

Neither can she forget the moment Damir left their house: "He kissed me on the forehead. He was a very good son.

"He then left with his father and that was it. When we were moving on buses we stopped at Kravica. We watched everything.

"My sister-in-law cried and said that she saw Damir and Kemal passing by. And I saw how they were going - their hands were behind their heads."

It was the last time Hanija saw her son and husband.

Hanija, together with her 12-year-old son Bakir and two daughters, later made it to a U.N. protected zone in Potocari.

Damir and Kemal's remains were later found in a mass grave in the town of Bratunac. In 2011, Damir's remains were formally identified. Only his skull was recovered. The family waited in vain for more of his body to be found. After so many years, only one more bone was eventually unearthed.

"It's been six years. ... If there was still something to be found, it would have been found," Hanija said.

Most of the bodies exhumed from mass graves after years of search and excavation work are incomplete. Some families are still waiting for more body parts to be found before burying their loved ones.

He will be buried next to his father who was buried in 2009, his grandfather and uncle.

Hanija said she has endured difficult times after the trauma of what she went through.

"I want to hang myself, and then I say: 'I have three more children, think of them.' Thank God, they all built their own lives, married, and have their own families."

As many as 71 more identified victims of the Srebrenica genocide will be buried on Tuesday.

Seven of the victims to be buried this year were younger than 18 when they died.