Nests belonging to Egyptian vultures, a red-listed endangered bird species, have been discovered in the Sarıkamış district of eastern Kars province.

The head of the Kuzey Doğa Association Çağan Hakkı Şekercioğlu said that according to scientific studies, the Egyptian vulture is one of the endangered bird species with the fastest rate of extinction worldwide. 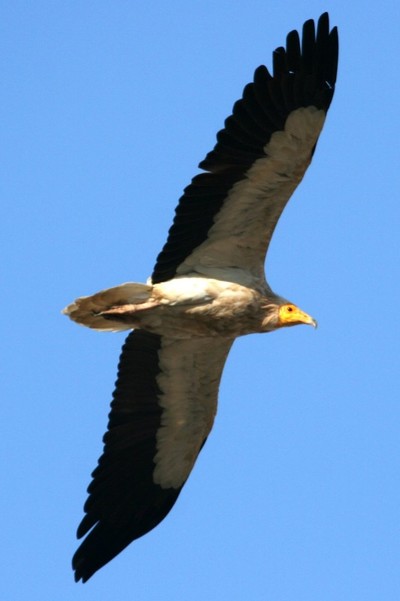 The monitoring of Egyptian vultures by satellite transmitter in Turkey has allowed scientists to learn more about the migratory routes of this endangered species. The birds migrate between eastern Anatolia and East Africa, to Ethiopia and Somalia, according to Şekercioğlu, an academician at both the U.S.'s Utah University and Turkey's Koç University.

Pointing out that the Egyptian vulture is the only species of vulture found in Turkey that migrates, the associate professor said, "Satellite imagery has indicated that the Egyptian vultures travel over half a million kilometers. Previously, we only observed a single vulture which flew more than 50,000 kilometers in a year, a distance that exceeds the entire diameter of the earth itself."

Şekercioğlu also indicated that the Aras River Bird Paradise located in eastern Anatolia is the only known native habitat of the Egyptian vulture, stressing that the area must be protected by conservationists.

The Aras River Bird Paradise is home to 278 bird species in addition to the Egyptian vulture, and is the first bird banding and research center to have been established in eastern Anatolia with roughly 90,000 birds being banded there.

Expressing his excitement regarding the study of Egyptian vultures in Kars, Şekercioğlu said, "We know that Egyptian vultures mate in the Arpaçay Canyon in the ancient city of Ani. It is of crucial importance for us to discover the nests of these birds in the cliffs around Sarıkamış. We haven't implanted transmitters on the Egyptian vultures living in Sarıkamış; however, according to our calculations, these birds migrate hundreds of thousands of kilometers annually; a tremendous stretch compared to the migratory routes of other birds."