Swiss couple laid to rest after 75 years buried in glacier 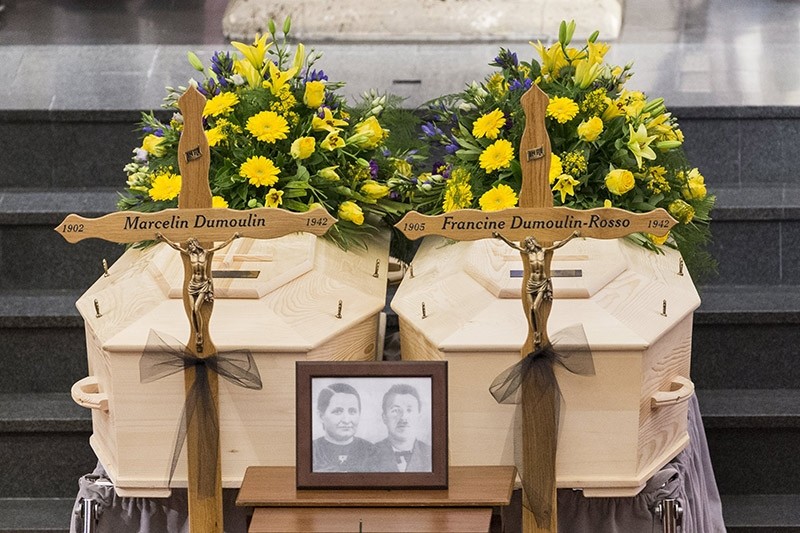 The coffins with the bodies in the church 'Eglise de St-Germain' during the funeral service of Marcelin and Francine Dumoulin in Saviese, Switzerland, 22 July 2017. (EPA Photo)
by Compiled from Wire Services Jul 22, 2017 12:00 am

A Swiss couple whose bodies were found on an Alpine glacier after they went missing for nearly 75 years has been buried in Switzerland.

Swiss broadcaster SRF said the funeral of Marcelin Dumoulin and his wife, Francine, took place Saturday in a church in Saviese in southwestern Switzerland.

SRF said two daughters took part in the funeral; the other five children have already died.

"Of course it is a relief to have found them, but it brings back memories because a tragedy like that, one doesn't forget," Monique Gautschy, one of the surviving children who was 11 at the time, told AFP by phone.

The funeral, also attended by the couple's grandchildren, great-grandchildren and local villagers, was held in the church where the couple had attended mass on August 15 before setting out on their trek, a priest Jean Varone told the ATS press agency.

Dumoulin, then 40, and his 37-year-old wife had left their home that morning hoping to check on their cattle, which were being kept in an alpine pasture in neighboring Bern canton.

The fastest route at the time was via a glacier footpath. The sky was clear when the couple set out, but clouds later worsened visibility and the pair vanished, likely after falling into a crevasse, orphaning their five sons and two daughters.

"I saw them leave that Saturday morning," recalled Gautschy of that fatal day. "They were supposed to spend the night in the alpine pasture at Grilden and come back on Sunday."

'I cried every day'

After two months of fruitless searching for their parents, the seven children, then aged 2 to 13, were placed in foster care.

After more then seven decades the remains of their parents were discovered on July 13 -- preserved in the Tsanfleuron glacier at an altitude of 2,600 meters (8,500 feet) -- by an employee of a local ski resort.

Backpacks, a watch and other personal belongings had been preserved in the ice nearby.

Gautschy told AFP that police called to inform her of the definitive identification early on Wednesday.

"I would have loved so much to see them one last time, to kiss them, but I was advised against it because they told me bodies found in snow or water decay very quickly and it would have been a shock," she said on Saturday.

The remains of her parents in white-wood coffins were later cremated and their ashes buried at the Saviese cemetery next to those of their oldest son, Gautschy said.

"From my kitchen, I see the mountain where Papa and Mama disappeared. I cried every day thinking of them. Now I know where they are."

The priest at the Saviese church summed up the feelings at the funeral, saying "three-quarters of a century later the family can at last stop asking the question: 'what happened to them?'