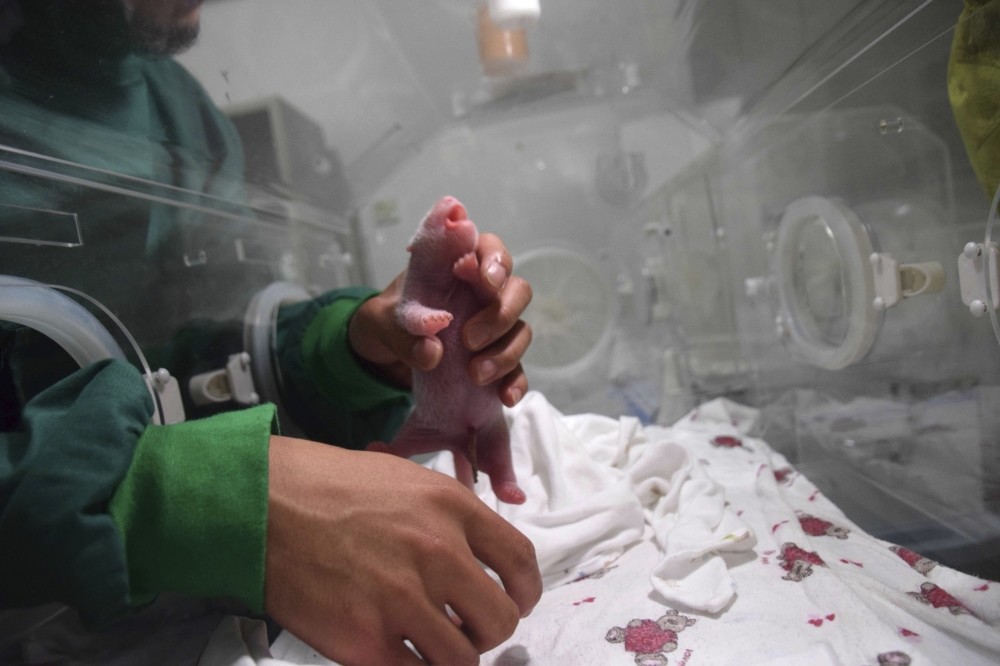 Palm-sized and pink, covered in a downy layer of white fuzz from its tiny claws to its long tail, the cub was born early Monday morning in southwestern Sichuan province to 15-year-old Cao Cao, who had mated with a wild male panda in March.

The cub's birth is the result of researchers' efforts to boost the health and genetic diversity of captive pandas by getting them to mate with their forest-dwelling counterparts, Xinhua cited Zhang Zhizhong of the China Conservation and Research Center for the Giant Panda (CCRCGP) as saying.

With only 471 captive pandas worldwide as of the end of last year, the species is at risk of inbreeding, Xinhua said.

Cao Cao, who has lived in captivity since she was two, was released back into the wild for a two-month stint in March wearing positioning and recording devices around her neck.

The recording device showed that after going into heat on March 11, she mated with a wild male panda for a minute and 30 seconds on March 23.

Her baby weighed in at a hefty 216 grams - exceeding the typical newborn panda weight of around 150 grams thanks to Cao Cao's good appetite during pregnancy.

Giant pandas are notoriously clumsy at mating, with males said to be bad at determining when a female is in the right frame of mind and often befuddled at knowing what to do next.

In the event the animals do feel compatible, sex is frequently over too quickly to impregnate the female, who is only receptive to the proposition for two or three days a year between February and May.

Fewer than 2,000 giant pandas are estimated to remain in the wild, in three provinces in south-central China.