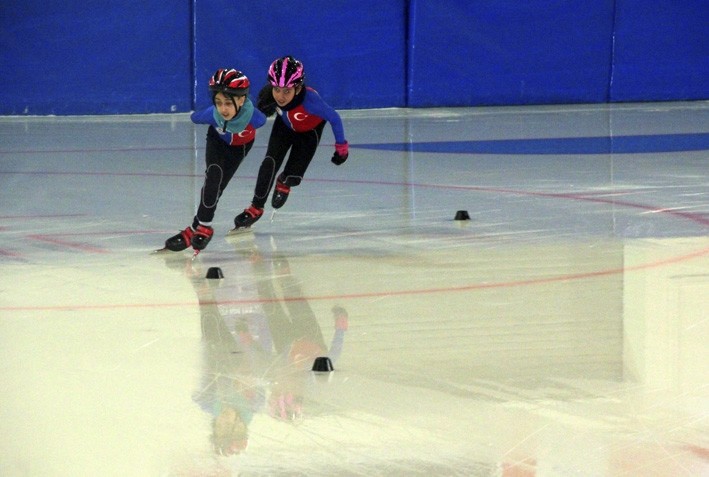 In Erzurum, adults and children are enjoying ice skating and ice hockey in halls which are 8 degrees below zero.

The locals in Erzurum, accustomed to the region's cold weather, show an increased interest in the city's ice skating and ice hockey halls during the hot summer days. A trainer from the Provincial Directorate of Youth and Sports, Yakup Aslan, told Anadolu Agency (AA) that they serve under the name of "Summer Sports Schools" in four halls where people enjoy ice skating and ice hockey.

Pointing out that the summer programs offered at their facilities begin at the end of the academic calendar year, Arslan said: "Nearly 5,000 children work with our professional trainers at these halls. We at the directorate have an ice hockey team and a youth team in the Super League. Our aim is to form a youth ice hockey team and to train national athletes. We want to make the best of these facilities, which were established six years ago."

Speaking about the difficulty in doing sports during the summer months, Arslan went on to say: "Ice hockey and ice skating increase in popularity in the summer months as people look for relief from the heat. For those who want to do sports while escaping the sweltering heat, I recommend ice skating. Our halls are kept at a temperature of minus 8 degrees. People entering these halls never want to leave. They enjoy both the sport itself and cooling down from the summer heat. Locals enjoy watching their children in our facilities rather than taking them outside in the sweltering 38-degree heat. In here, people can avoid the harmful effects of the sun."

Having done ice skating and ice hockey for four years, Beran Tosunoğlu said: "I want to make the best of these halls since I love ice sports. The people in Istanbul go swimming in order to cool down. Here in Erzurum, we do ice sports."

Noting that she likes ice skating, Nisanur Güvensin said, "I was previously participating in public sessions. Then, I started to come to the sports schools. I really have fun here. We are having fun throughout the daytime hours. Erzurum is not close to the seaside so ice skating is a way for us to get cool."

Hatice Özkaya said that she brings her son and nephew here and she cools down as well while she is watching them do ice sports.