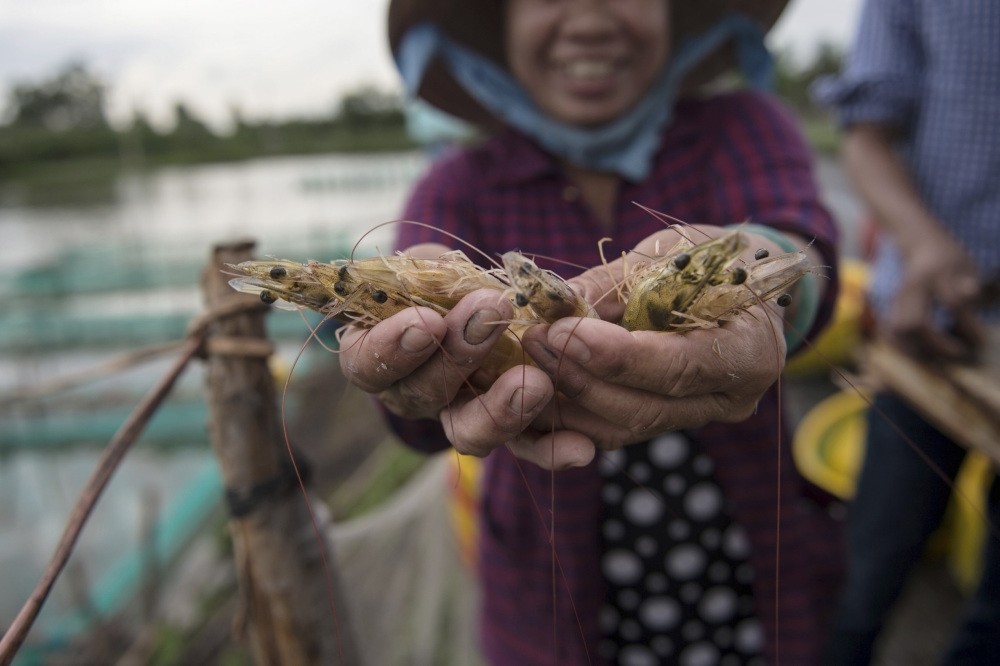 A shrimp farmer smiles as she shows shrimp she harvested from her pond in the My Xuyen district in southern Vietnam.
by Aug 11, 2017 12:00 am

With a flashy gold watch and a chunky matching ring, Tang Van Cuol looks a far cry from the average Vietnamese farmer as he slings back a shot of rice wine and boasts about his projected earnings.

After years of scratching a living growing rice and onions or farming ducks, the 54-year-old says his life was transformed in 2000, by shrimp.

The Mekong Delta, long renowned as the "rice bowl of Vietnam," is now also home to a multi-billion-dollar shrimp industry and burgeoning numbers of farmers are building fortunes from the small crustaceans.

"Raising shrimp can bring so much income, nothing can compare," Cuol says over lunch with friends, a healthy spread of rice, salad, pork and of course shrimp.

This year he expects to make one billion dong, or around $44,000, an enormous sum in the delta, where rice farmers make around $100 a month.

The shrimp bonanza began in the 1990s when rising sea-levels seeped saltwater into the Mekong Delta.

It has surged in parallel with demand from the U.S. and European Union.

Savvy locals were swift to spot the changing conditions were ripe for shrimp farming.

Cuol owns several motorbikes, funded his daughter's wedding and claims an impressive collection of antiques "worth hundreds of millions of dong."

But environmentalists warn that the bounty from intensive shrimp farming may be short-lived.

But a wider crisis is looming caused by the obliteration of mangrove forests to make way for farms, exposing the area to lashings from storms and further rises in sea-level linked to climate change.

"This is not sustainable," said Andrew Wyatt, Mekong Delta Program Manager at the International Union for Conservation of Nature (IUCN).

The IUCN is encouraging farmers to preserve mangroves and stop using harmful chemicals so their shrimp can be certified as organic, earning a five to 10 percent premium in the process.

Yet shrimp farmers say the financial rewards are too great to ignore.

Just like his father and grandfather, Tang Van Tuoi struggled as a rice farmer.

He slept under a roof fashioned from coconut palms, earning just enough to support his family.

But when saltwater started creeping into his rice fields, he saw an opportunity and started harvesting shrimp.

"Now everything is developed, we have vehicles, roads, things have changed massively," he told reporters from his polished living room, where a flatscreen TV hangs over a wood furniture set.

Flush with cash, he has built three homes for his family. "We have money, we have enough of everything," said the father of six, as his granddaughter played a video game on a smartphone nearby.

But he admits that such farming is a gamble.

His ponds have been hit by disease and pollution.

Attuned to the long-term risks, the government has resisted opening the whole region to the shrimp industry even as seawater continues to seep further inland. Instead, authorities have ploughed millions of dollars into sealing off freshwater zones needed to grow rice, the nation's staple, throughout the Mekong Delta.

The strategy is in part to ensure the region can grow enough rice to feed the country, a historic pillar of the communist government's centrally planned economy.

But as the country has embraced market reforms, the lure of exporting high-earning shrimp, mainly to Europe and the United States, has become increasingly attractive.

This year, the prime minister called for shrimp exports to reach $10 billion by 2025, a jump from $3 billion last year.

In parallel, export earnings from rice have steadily declined since 2011, bringing in $2.2 billion last year.