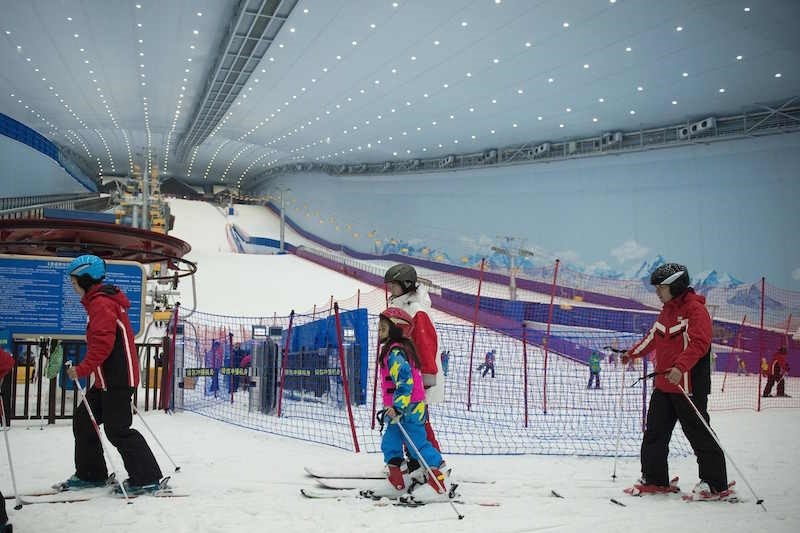 While the summer sun beat down in the northern Chinese city of Harbin, inside it was perfect weather for skiing in the world's largest indoor ski park.

At the city's new Ice and Snow Park, chilly winds blew snowflakes around skiers zipping down the manmade slopes of the world's largest indoor ski park, a potent symbol of China's ambitions to turn itself into a winter sports powerhouse ahead of the 2022 Winter Olympics in Beijing.

"Skiing here is just like skiing in a big refrigerator," ten-year-old Kane Li grinned beneath his neon goggles, who has his hopes pinned on competing at the games.

A student at a private ski academy in the capital, Kane and his fellow young Olympic aspirants used to spend their summers training in New Zealand, but the opening of Dalian Wanda Group's indoor ski park this summer means they can now stay closer to home.

"China's skiing is still not so great (compared to other countries)," Kane said, adding: "We must train hard every day. Train more."

Not long ago, skiing was considered a luxury activity in China, inaccessible to the average person.

The country is currently home to roughly six million skiers, but President Xi Jinping hopes that number will rise to 300 million in the coming years.

China has had great success at the Summer Olympics, but its few Winter Olympic victories have been centred on speed skating. The country has won just six skiing medals -- all in freestyle -- including one gold.

There are currently about 200 ski resorts in China. Chinese officials are aiming to increase that number fivefold by 2030.

"We didn't have anywhere to ski when I was growing up," said Yi Li, the general manager of Wanda's indoor park.

The Beijing native first tried the sport 11 years ago while working at a ski resort in northern Hebei province's Zhangjiakou, which will host the Olympic alpine skiing events.

He picked up the sport quickly, becoming an instructor and even training in Switzerland.

Now he says China is ready to make skiing a national pastime.

"Skiing is hip," Yi said. "From the apparel to the equipment, there's a lot of freedom."

He recalled that when he first discovered the sport, most Chinese people were unwilling to try it because the gear was expensive, and they needed a car to reach the mountains.

But after the country's economic reforms, people had more disposable income and more time to take vacations, he said. They bought cars and stopped viewing skiing as "dangerous."

There were about 40 people on Ice and Snow Park's slopes on a recent Tuesday. Some carved through the firm and "sticky" snow with ease, while others struggled to get their skis on.

An agile snowboarder helped a stumbling skier to the bottom.

The slopes are equipped with a chairlift, a sledding area and a bunny hill, not to mention a ski lodge bedecked with faux wood.

According to Yi, 13 professional teams from across the country have also been coming to train in the mornings since the slopes opened.

And then there are groups like Kane's, which trains with the Beijing-based International Ski Academy and hopes to make it to the Olympics.

The prepubescent athletes planned to spend nearly a month in Harbin, skiing four hours a day at the indoor park.

"At the moment the government is very supportive of skiing," said Zhao Quan, the principal of the ski academy. "They're vigorously promoting the development of the sport in primary and secondary schools around the country."