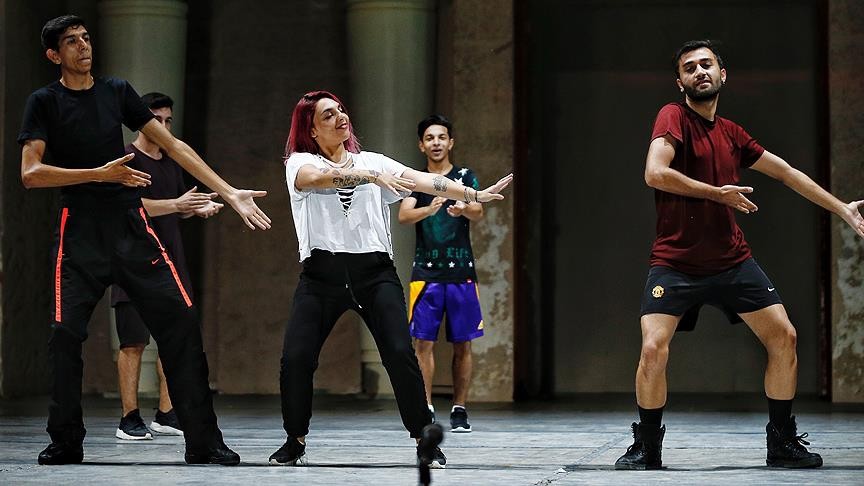 Roma dancers have been trained with the Fire of Anatolia team as part of the EU-backed project.
by Anadolu Agency Sep 19, 2017 12:00 am

In line with the "Dance Meets Roma Project," financed by the EU, 50 Roma youths from 11 different regions had the opportunity to be trained in the famous dance group Fire of Anatolia.

Stating the Roma youth have now shared the stage with Fire of Anatolia, General Art Director Mustafa Erdoğan said: "They will be with us for the Serbia tour starting next month. We intend to keep talented friends as dancers in the group."

Eight dancers among the Roma youth have experienced the excitement of sharing the same stage with 100 professional dancers in Fire of Anatolia at Aspendos Arena.

The Roma dancers, performing with the professional artists and Mustafa Erdoğan, enjoyed the dance and also entertained the audience.

Speaking to Anadolu Agency (AA), Mustafa Erdoğan noted that "Dance Meets Roma People" is a social responsibility project. The project was organized by the Ministry of Labor and Social Security, the European Union and its communities a year ago. They started work in April, and the Roma dancers took their places in the Turkey tour.

"They will also be with us during the Serbia tour that starts next month. It is a great pleasure to work with them. We will have the talented ones remain in our group. We are working with a group comprising of 50 Roma dancers. We have brought them together from various places around Istanbul. We also have friends coming from Kırklareli and Edirne, too," he said.

Erdoğan added that the Roma dancers have their own repertoires, and they have been given the lessons of modern dance, ballet, stretching and conditioning.

Gizem Nalbant, one of the Roma dancers, said it is very exciting to share the same stage with Fire of Anatolia.

While discussing Fire of Anatolia's contact with her during the Roma workshop in the Sulukule district of Istanbul, Nalbant said: "We thought Fire of Anatolia was an opportunity, and we joined in the project. It is a great feeling to be a part of a crowded dance group, and when the group is Fire of Anatolia, the thrill is even bigger."

Explaining that he found out about the project on the internet, Ömer Koşucuoğlu also said: "It is a great thing to dance in this group. I am really happy, my dreams came true. I think I am good at dancing. I want to travel around the world with Fire of Anatolia."

Onur Kopağan, a university student, said: "We have prepared something new by blending gypsy dances and Fire of Anatolia's choreography. I want to be a better dancer and join international tours in the future."

One of the trainers of the group, Kemal Gemici, said the Roma youth were discovered through their district administrations or through their affiliated foundations.

He continued: "They have discovered their bodies, learned again, stretched and received conditioning training. Their body shapes have also changed. They are more muscled now. They were trained like professional dancers. This changed their perspectives on dancing and their plans for the future. We have also learned about gypsy dances from them. We have been trying to combine this with their choreography by being careful not to interfere. We have been trying to provide syntheses. As a result, Fire of Anatolia will carry their dances in a different direction."