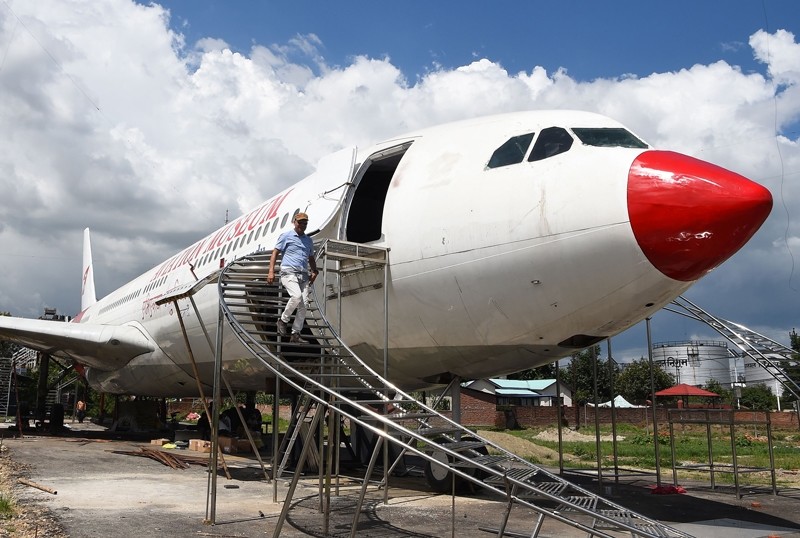 A Turkish Airlines plane that crash landed at Kathmandu airport two years ago will be welcoming ticket holders on board again - not for a flight but as the Nepali capital's first aviation museum.

The Airbus A330 was carrying 224 passengers when it skidded off the runway at Kathmandu's airport in March 2015, coming to a stop with its nose buried in the grassy verge on the edge of the tarmac.

No one was hurt, but the crash shut Nepal's only international airport for four days as technicians struggled to move the plane.

It was eventually dragged to a disused corner of the airport where it sat rusting for two years - until pilot Bed Upreti had an idea.

"It is unfortunate that the aircraft (had) an accident and was grounded, but I saw a perfect opportunity," Upreti told AFP.

He bought the metal carcass and has invested $600,000 to turn it into an aviation museum.

Upreti's first task was moving the 63-meter plane across the road from the airport to the museum's lot - which proved harder than expected.

He previously brought an abandoned Fokker 100 - which is about half the size of an Airbus A330 - and transported it 500 kilometers to Dhangadi in Nepal's far west where he also set up a museum, though on a smaller scale that this one.

"Transporting that plane across districts was much easier than relocating the Airbus meters away from the airport," Upreti said.

Working only at night when the airport was closed, it took a team of engineers from Turkey six weeks to dismantle the plane into 10 pieces, before loading them onto trucks for the 500 meter journey across the road.

It took another two months to put all the pieces back together.

With all the seat stripped out of the belly of the plane, the new museum feels surprisingly spacious.

The business class section of the plane will feature a model of the Wright Brothers' first aircraft - the first machine to successfully take to the sky - and in the tail there will be a cafe.

More than 150 miniature display planes will chart the history of aviation as well as the story of Nepal's flying industry.

Himalayan Nepal is heavily reliant on a network of domestic air routes to compensate for its limited road network, though the country's airlines have a poor safety record.

For many in the impoverished country, the airfares are also beyond their means.

"It (the museum) will give a chance to some Nepalis who might never fly to step into a plane," said engineering student Shyam Rauniyar, 22, who was part of the team that put together the replica of the Wright Brother's plane.

Upreti hopes that the museum will inspire young minds to become pilots and engineers, and is confident that it will be a hit with visitors.

"Passers by are already peeking to get a glimpse," he said.