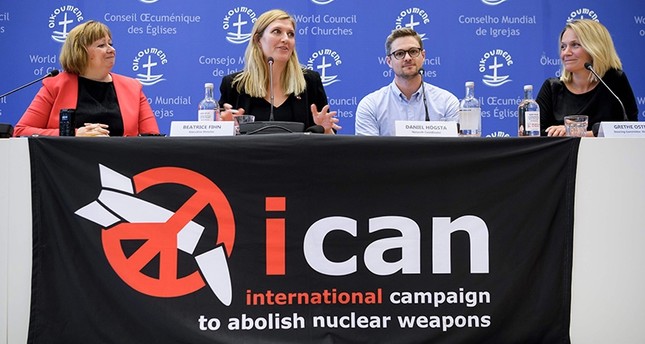 An 85-year-old survivor of the atomic bombing of Hiroshima will jointly accept the 2017 Nobel Peace Prize together with this year's laureate, the International Campaign to Abolish Nuclear Weapons, ICAN said on Thursday.

Setsuko Thurlow, who was 13 at the time of the bombing on Aug. 6, 1945, will be on stage in Oslo on Dec. 10 together with Beatrice Fihn, ICAN's executive director, to receive the Nobel Peace Prize award.

"Thurlow has been a leading figure in ICAN since its launch in 2007," ICAN said in a statement on Thursday.

"She played a pivotal role in the United Nations negotiations that led to the adoption of the landmark treaty outlawing nuclear weapons in July."

Thurlow has for seven decades campaigned against nuclear weapons. Born in Japan, she now lives in Canada.

At Hiroshima, she was rescued from the rubble of a collapsed building about 1.8 kilometres (1.1 mile) from Ground Zero. Most of her classmates, who were in the same room, were burned alive, she said in an account of her experiences.

In her speech announcing the prize in October, the leader of the Norwegian Nobel Committee said the risk that nuclear weapons might be used was now "greater than it has been for a long time".

Share on Facebook Share on Twitter
Previous in Life The European Court of Justice (ECJ) ruled on Thursday that the card... Next in Life New Zealand's new Prime Minister Jacinda Ardern is leading with a...
DAILY SABAH RECOMMENDS