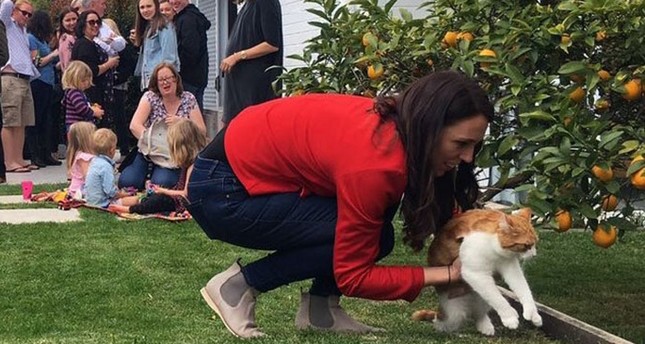 New Zealand's new Prime Minister Jacinda Ardern is leading with a special feline by her side, her "First Cat" Paddles.

Paddles made her Twitter debut on Oct. 21 under the tag @FirstCatofNZ, and has since been adored by Arden's supporters and animal lovers worldwide.

Arden, who is the country's youngest-ever leader, rose to prominence in the labor party after entering parliament at age 28 in 2008.

Arden claims she has "no idea" who made the Twitter account, but said Paddles' polydactyl "thumbs" make her suspect. Polydactyl cats are born with extra toes on their paws.

Hi, I'm Paddles and I am the First Cat of New Zealand. I have opposable thumbs, I'm purrty special. pic.twitter.com/MPkxdhWCRu

"Keeping in mind Paddles has thumbs, I can't put it past her it's her own account as well," Arden joked.

Malaysia's Najib Razak is a well-known feline enthusiast, with four long-haired cats that lounge in his official residence. Leo, Kiki, Tiger and Simba are well-loved by Malaysians.

In response to a picture of Tsai cuddling her kitty, Twitter user Jeremy Tiang asked, "Is Taiwan's new president Tsai Ing-wen the first to use cat videos as an election strategy?"

Is Taiwan's new president Tsai Ing-wen the first to use cat videos as an election strategy?https://t.co/YQSYZaB7KY pic.twitter.com/W2Yk7MdRwY

The outtray looks better than the intray. My cup of tea is no longer safe on my desk: @DiploMog is a tea drinker pic.twitter.com/wctkXKdgXb

Share on Facebook Share on Twitter
Previous in Life An 85-year-old survivor of the atomic bombing of Hiroshima will jointly... Next in Life Liberal principles prevailed in Ottoman economic life, but it was...
DAILY SABAH RECOMMENDS